Long ago I developed a writing exercise. I would ask friends to give me three

completely random things. Then I would write until I had mentioned all the things. I brought that exercise to my blog, but I had the readers send me their things. I let the random things drive every detail of a serial story, setting, plot, and characters. That resulted in The Three Things Serial Story, which gave birth to this culinary mystery. However, this time the “things” are food related — or ingredients.

As with the first serial, Murder at the Bijou — Three Ingredients I is a spontaneously written, pantser story. I let the “ingredients” readers sent each week drive every aspect of a new serial story. This is the “bookized” version of that serial.

This time the Jazz Age setting is Savannah, Georgia where our flapper, Pip is “sentenced” to live with her grandmother and learn to cook. Pip gets caught up in a layered mystery that includes bootleggers, G-men, and the varied challenges of being a young woman in changing times. She meets new friends including some animal characters.

If you have not read The Three Things Serial Story, be warned. This adventure contains a bit of a spoiler, but does not go into detail about it.

If you’re a frequent visitor to Teagan’s blog, you’re undoubtedly familiar with Paisley Idelle Peabody, better known as Pip, and her determination to be a level-headed modern woman.  A flapper.  Pip leads quite an adventurous life, and in this book stumbles upon a murder.  The supporting characters are colorful and entertaining, and Granny Phanny is a force to be reckoned with.

I’m fascinated by the author’s ability to take three randomly suggested items by fans and build a story around them.  As my son would say, “What sort of black magic is this?”  What a talent she possesses.

I curled up with this book on a cold day peppered with snow flurries, hot chocolate on the table beside me – a perfect read for that kind of day.  Fun, amusing, unique – you can’t go wrong with this book.

This week seemed to fly by – but here we are again at Indie Author Friday with Connie Chappell!  Connie is my kind of people – Harry Potter fan, loves chocolate chip cookies, and I’d totally re-watch The Crown.  Read on for the wonderful compliment she received from a reader. 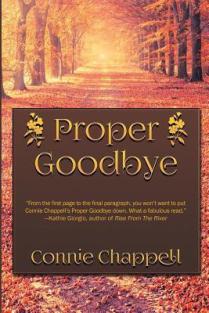 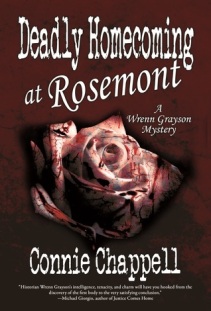 Beebe Walker returns to Larkspur, Michigan, to reveal to her estranged father the truth about the homeless woman recently buried in his cemetery. Her father doesn’t want to hear the truth when the woman in the grave he’s been tending for months turns out to be his long-missing wife.

Callie MacCallum was Jack Sebring’s lover for twenty years. After his death, she’s drawn into a Sebring family battle between wife and daughter-in-law.

A budding historian must solve a locked-room murder to vindicate the town’s former police chief who is suspected of the crime. While her instincts are sharp, her stubborn one-woman approach places her directly in the killer’s path.

Of course, the most constructive criticism can also be termed outstanding advice. I sat one-on-one with bestselling author Larry Beinhart (Wag the Dog) for an hour discussing my manuscript, Deadly Homecoming at Rosemont, A Wrenn Grayson Mystery. He told me to write in a straight line. The timeline within my narrative summaries moved around, making it difficult to follow. Whenever I find myself struggling with a section of a novel, I take a look at the timeline. Often all that is needed is to drag Larry’s advice out again, straightened out the timeline, and then watch the section drop neatly into place.

What is something memorable you heard from your readers/fans?

A woman bought my first release, Wild Raspberries, at a book signing. I saw her the next week. She rushed by me, obviously in a hurry or late for an appointment, but on the way past she said, “I loved the book. It made me late for work twice last week.”

My novel, Proper Goodbye, includes a character named Mona Gabriel. She has position as a doctor’s wife, but she’s a gossiper, troublemaker, and always wants to push herself in if doing so associates her with success of an undertaking. It’s hard to image she walks around accident free, what with her nose up in the air the way it is.

What is the last thing you watched on Netflix?

I watched the series, The Crown. It was fabulous. So much so, I turned right around and watched it again. Very well done. It exposed the private lives of the royal family, along with a great deal of history. A young Queen Elizabeth II faced many decisions to weigh and struggle with. The order of succession and the passing on of the crown was particularly fascinating to understand from the royal family’s point of view.

If you were a character in fiction, who would you be?

I would want to be any character in the Harry Potter series if it meant I got to see the castle, Hogwarts, and the grounds surrounding the castle. I love castles and large old stone structures. They are amazing feats of construction for their time.

What is your favorite kind of cookie and why?

My favorite kind of cookie is chocolate chip, right out of the oven. Warm. Melt in your mouth chocolate. Yum! I consider chocolate one of the four basic food groups.

Connie Chappell is the author of three novels. Wild Raspberries and Proper

Goodbye are companion novels. They are written around unique and stunning premises. Her Wrenn Grayson Mysteries series was launched in 2016 with Deadly Homecoming at Rosemont. The construction of a mystery holds her values as a writer to the centerline. It is her job to keep the reader focused, on track, and riveted to solving the mystery. The series’ second installment, Designs on Ivy’s Locket, is set for an October, 2017, release by publisher, Black Rose Writing.

It’s the oldest bookshop in a town full of bookshops; rambling and disordered, full of

treasures if you look hard. Jude found one of the treasures when she visited last summer, the high point of a miserable vacation. Now, in the depths of winter, when she has to run away, Lowell’s chaotic bookshop in that backwater of a town is the safe place she runs to.

Jude needs a bolt-hole; Lowell needs an assistant and, when an affordable rental is thrown in too, life begins to look up. The gravedigger’s cottage isn’t perfect for a woman alone but at least she has quiet neighbors.

Quiet, but not silent. The long dead and the books they left behind both have tales to tell and the dusty rooms of the bookshop are not the haven they seem to be. Lowell’s past and Jude’s present are a dangerous cocktail of secrets and lies and someone is coming to light the taper that could destroy everything. – Goodreads.com

As a book lover, the idea of starting over somewhere and working in an overcrowded bookstore in a picturesque little town, surrounded by towers of books, appealed to me immediately, though I’d probably be fired on the first day because all I’d want to do is read.

The reader knows Jude is running from something, but the reason isn’t revealed until about halfway through the book.  I honestly didn’t care for her at first, as she seemed very self-absorbed and selfish, but warmed up to her after a bit.  Lowell is amusing, charming, and a perfect gentleman.  The author did a wonderful job at demonstrating the good and bad of eccentric, small towns – neighbors care for each other, but everyone knows everyone else’s business.

While I’m glad I stuck around for the unexpected twists and satisfying ending, the pacing of this novel nearly drove me to abandon it.  Yes, Jude has a mysterious background, but a large portion of the first half of the book is more focused on her living arrangements and the extremely detailed organization of the bookstore, aspects that didn’t really advance the plot in any way, and the slow trickle of information left me frustrated more than anything.  I generally prefer a faster pace in my reading, so that may not be an issue for other readers.

If you’re a fan of more leisurely paced, cozy mysteries with a surprising turn of events, this is your book.  Quiet Neighbors is scheduled for publication April 6th, 2016.

This review is based on a digital ARC from the publisher through NetGalley.