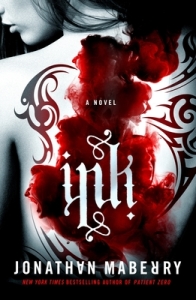 From New York Times bestselling author Jonathan Maberry comes a standalone supernatural thriller Ink, about a memory thief who feeds on the most precious of dreams.

Tattoo-artist Patty Cakes has her dead daughter’s face tattooed on the back of her hand. Day by day it begins to fade, taking with it all of Patty’s memories of her daughter. All she’s left with is the certain knowledge she has forgotten her lost child. The awareness of that loss is tearing her apart.

Monk Addison is a private investigator whose skin is covered with the tattooed faces of murder victims. He is a predator who hunts for killers, and the ghosts of all of those dead people haunt his life. Some of those faces have begun to fade, too, destroying the very souls of the dead.

All through the town of Pine Deep people are having their most precious memories stolen. The monster seems to target the lonely, the disenfranchised, the people who need memories to anchor them to this world.

Something is out there. Something cruel and evil is feeding on the memories, erasing them from the hearts and minds of people like Patty and Monk and others.

Ink is the story of a few lonely, damaged people hunting for a memory thief. When all you have are memories, there is no greater horror than forgetting.

Take a moment to appreciate this exquisite cover – the designer did a magnificent job.  It’s been a while since I’ve read a Jonathan Maberry book, and after Ink, I’m kicking myself and wondering why.

From what I’ve seen in other reviews, the town of Pine Deep is featured in other Maberry novels, as are Monk and Patty.  I haven’t read those, but never felt as if I was missing anything.  Newcomers won’t be confused.

Antagonist Owen Minor is compared to a “psychic vampire” – he feeds on the tattoos and memories of others.  With such a large cast of eclectic characters, he’s got a veritable buffet to choose from in “The Spookiest Town in America”.  Two of his victims are Monk and Patty, who are easily my favorites.  Their stories are tragic and profoundly moving, and the loss of their memories and tattoos is deeply personal and gut-wrenching.  I ached for both of them.  Minor is abdominable, revolting, and intensely disturbed, and I felt slimy after every scene he was in.  I’ll never look at flies in the same way again and will be quicker to swat them in the future.

And that action-packed ending!  Holy crap, I don’t think I blinked once while reading it.  While it was mostly satisfying, I did feel as if some of the characters’ stories fell to the wayside and were left unresolved.  As a warning to readers who are faint of heart, Ink contains some graphic, gory scenes so be prepared.

This novel is bizarre, freaky, horrific, and often times gut-wrenching, but it makes me want to read the Pine Deep series.  I’d also love to see Patty and Monk in future books, so I’m hoping the author has a plan.  Highly recommend for horror fans!