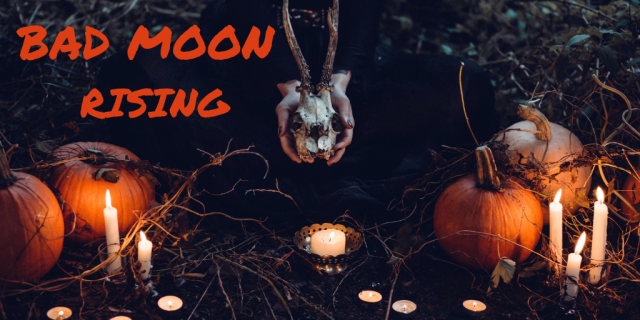 Happy Monday!  Today’s guest is sure to pull you out of your Monday morning slump.  Her creativity knows no limits, and she’s brought along Lulu, her main character, to join in for the interview.  I’m willing to bet a lifetime supply of chocolate you’d never guess which movie scared her so much she couldn’t sleep.  Welcome Teagan Riordain Geneviene!

Hi, Teri. Thanks so much for letting Lulu and me be part of Bad Moon Rising 2020! (Lulu, there’s a bit of horseradish on your mouth. Ugh, did you just burp?)

As I was about to say, I don’t write real horror, but Hullaba Lulu — a Dieselpunk Adventure has some pos-i-lutely creepy moments. In honor of Bad Moon Rising, my new novella is priced at 99¢ (Kindle version only), throughout October. (What Lulu? Yes, I know that cold hand on your shoulder in the abandoned train station really scared you. Now, stop that, Lulu. I know you’re excited, but if you dance the Lindy Hop in Teri’s office, you’ll knock something over. Hey, do I smell giggle water on your breath?)

Anyhow, it’s been fun seeing not just everyone’s answers, but the questions they chose. Here are my answers. They tell a little bit about me. (Shush, Lulu! Nobody needs to know that much about me.)

Has a movie or book scared you so much you couldn’t sleep? Which one?

The Doors (1991) with Val Kilmer. No, that’s not a horror movie, but I woke up screaming — more than once afterward. There was a short bit about Andy Warhol in the movie. Heaven knows how my subconscious works, but I had a couple of nightmares from which I woke up screaming. LOL, Andy Warhol was about to get me, who knows for what nefarious intent. Haha. For at least a month the backbeat of Break on Through to the Other Side pulsed in my head. I love that song, but ever since, I’ve felt a creepy otherworldly association with it. Like I say ― I’m not wired right! (What Lulu? You’re right, the Ouija board navigation system in Valentino’s train isn’t wired right either.)

If you were in a horror movie, would you rather have a loaded gun or a car that wouldn’t break down?

Give me the car. I have terrible aim. I did “target practice” a couple of times with some friends. We were using their old barn. I literally could not hit the broad side of that barn. However, there have been a times when I’ve had to perform some rather impressing driving maneuvers ― but that is not a story for today. Yeah… definitely the car, not the gun. (Oh, and don’t bring Lulu — she doesn’t know how to drive, as you’ll see in the novella.)

Would you rather put your hand in a box and feel something slimy or furry?

I’m really not sure, that depends on the context. However, in a real life case, it was something furry. Decades ago, my beloved cat went down the tubes of an open dryer vent. (I was lied to about the surrounding circumstances. I had to live somewhere that was not my home, during my divorce. I was told the dryer was hooked up properly, even though the person I was staying with knew that was a lie.) After singlehandedly moving both the washer and dryer (at least twice ― I had an adrenalin surge) trying to find my cat, I heard a raspy hissing sound down inside that hole/tube/vent. I wasn’t sure if it might be a snake or a rat, but I prayed it was the cat. I thrust my hand into the tube (equal to the box in your scenario). My fingers reached something furry, and I grabbed on. Thank goodness it was the cat. (Yes, Lulu. Teri is the cat’s pajamas.)

What was the hardest scene to write in your featured book?

The ending, with all the wild concepts I had to pull together, was by far the hardest. Plus, where there’s Lulu, there’s trouble. That’s why she’s called Hullaba Lulu. So, on top of all that, I had to end with something at which I could hint that Lulu is about to do, off screen, that would result in chaos. (I know, Lulu. I want to write that sequel too. Just drink that jorum of skee and don’t give any spoilers.)

Which comes first for you – plot or characters?

Actually… neither, at least most of the time. Usually, the thing that comes first for me is the world I build. Lulu is an exception to that rule. The title character and her two friends, Pearl and Rose, were inspired by the song “Don’t Bring Lulu.” It was recorded by Billy Murray in 1925. My Lulu stays “wild and wooly” true to the flapper described in the lyrics of the song. (Yes, I know you hate that song, Lulu. Now stop touching things in Teri’s office.)

Oh… I admit this is a bad thing, and I certainly don’t recommend it. Lately my writing space is me plopped in the middle of my bed with my laptop. It’s the quietest room in the house. I can stare out the window to the back yard when my brain needs to dance away for a moment. My back hates me for it though. One of these days I’ll finish my office. (Lulu, you know I don’t have any angel-bots to do the work. Heaven knows I wish I did!)

I’m afraid that I have to remain fairly secretive about my novel in progress. That’s hard because it’s such slow going… Or maybe that’s why it’s going so slowly — because I thrive on sharing. However, I’ll tell this much… It started with my mental image of go-go boots like the ones I had as a little girl, and them stepping onto sandy pavement. It’s a genre mash-up set in the 1960s, and there are cats. I’m grateful to Dan Antion and Olga Núñez Miret for doing alpha reads of part-1. (No Lulu. It isn’t your sequel. I told you not to touch things. Put that down.)

Hullaba Lulu, a Dieselpunk Adventure is a wild and wooly 1920s fantasy story. Lulu, the heroine is inspired by the song, “Don’t Bring Lulu,” from 1925 ― so are her pals, Pearl and Rose. My Lulu loves to dance, and freely indulges in giggle water. She snores and burps and says whatever she wants. Lulu is a snarky but good-hearted flapper. The song’s inspiration stops there, but the story is just beginning.

Travel with Lulu and her friends on a magical, dieselpunk train that belongs to the smolderingly handsome and enigmatic man known only as Valentino. They get into all sorts of trouble, usually due to Lulu’s clumsiness. It’s an intense ride through a number of pos-i-lutely creepy settings, including “sideways” versions of Atlantic City and the Cotton Club. At every stop and in between, Lulu ends up creating chaos. There’s no telling where they’ll end up. No, Lulu! Don’t touch that!

Lulu’s the kind of smarty, breaks up every party,

I’ll bring her myself!

In honor of Bad Moon Rising, throughout October, the eBooks of Hullaba Lulu are at an introductory price of 99¢. For those who boycott Amazon I made a Kobo eBook too. 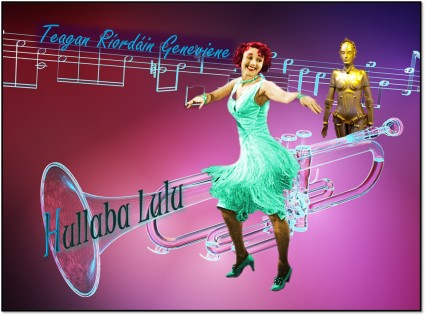 While it is not exactly a companion volume to any of my Roaring Twenties stories, I’ve written a 1920s slang dictionary. I’m careful to use slang in a context that makes it understandable, but you might enjoy having Speak Flapper. It debuted at #1 in its category at Amazon. Here’s a review from Annika Perry at Goodreads.

(Lulu. If you can’t stop touching things, you’ll have to wait in the car. Just go on outside.)

Teagan Ríordáin Geneviene’s work is colored by her experiences from living in the southern states and the desert southwest (of the USA). Teagan most often writes one kind of fantasy or another, including the “Punk” genres, like steampunk, dieselpunk, and atompunk. Whether it’s a 1920s mystery, a steampunk adventure, or an urban fantasy, her stories have a strong element of whimsy. There are no extremes in violence, sex, or profanity.

Her talents also include book covers and promotional images. She makes all of her own. Teagan is currently exploring the idea of offering that service to others.

All of the books by Teagan Ríordáin Geneviene are available at her Amazon Author Page.

Her latest release is from the punk genres, Hullaba Lulu, a Dieselpunk Adventure.

You can also visit me at: