Who here is a fan of root monsters?  Haven’t heard of them?  I have good news for both groups.  First, they’re back.  Second, if you haven’t had the pleasure of meeting them, now you’ll have two opportunities to get acquainted with this bunch of Minion-like, fun-loving creatures who will root (pun totally intended) their way into your heart!  Voyage of the Lanternfish, the first book in this series, is full of adventure on the high seas, a hint of magic, a touch of romance, and quirky characters – the aforementioned root monsters.  Craig Boyack is here today to tell us how these charismatic little critters sprang forth from his imagination.  Over to you, Craig!

Thanks for lending me your space today, Teri. It’s always nice to have places to promote when we have new books available.

My newest is called HMS Lanternfish. It’s the second book of a planned trilogy, and I’ll include a link for the first one if people want to catch up. I’m going to make this one of those behind the scenes author posts about part of the story.

When I wrote Voyage of the Lanternfish, I had a rescued slave named Mal who turned out to be kind of a witch doctor. I’m one of those authors who plans, but I discover a lot of my story during the drafting phase. When you have a witch doctor, he has to have something useful to do in the story.

This started out with my lead characters running from the law on land, prior to their first act of piracy. They needed someone to watch their camp, so Mal planted some peelings from an old yam in the window box of a wagon they had. These things grew fast, and when they got to camp he harvested them. They were little creatures who could watch the camp that night. I called them the root monsters.

Mal was from a tropical island, so I decided the little buggers would speak in a kind of pidgin English. That way they could receive assignments and carry out their tasks. When I first created them, I thought they might only live one day. With his old yam, Mal could grow new ones whenever the group needed a bit of extra help. It’s a fantasy world and this seemed like a good idea.

The root monsters turned out to be kind of sassy and accomplished their goals in weird ways. I decided they were fun and started using them occasionally as a kind of section break. Rather than a cluster of asterisks, we’d get a little something from their angle before the tale moved on to the next location. By this time, it was kind of obvious they weren’t going to have short lifespans, and they were a bit of comedy relief.

That’s when my mind started dwelling on other uses for them. These guys don’t have a goal, they’re along for the ride and are part of the ship’s crew. It became kind of funny to grow more and more of them until it became a point of concern. Just how many of the little buggers did the captain need? Absurdity seemed to work, so I kept going.

These guys are tiny, like walking talking parsnips if you will. Swarms are scary. Pirate tales need a bit of violence. They became a formidable force, but only as a swarm.

They became keepers of a verbal history of the crew’s adventures. This is almost tribalistic, but they tend to relate their stories through their own filters. What readers got from the adventure isn’t necessarily how the monsters relate the tale somewhere down the line.

Readers from the first book got eased into their pidgin English, to the point they could speak root monster by the end. That was kind of a fun thing to pull off as an author.

What I never saw coming was how beloved these guys became to my readers. I was 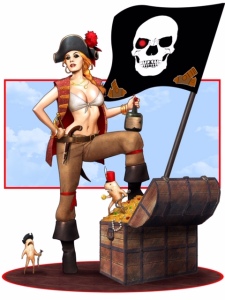 even asked for a stand-alone root monster story a couple of times. I declined, because I think they’re better in small doses. It’s the old leave them wanting more concept.

In my mind they were a means to an end. They could sneak into places and steal things under the cover of night, run small errands, even sound a tiny horn to protect the crew. My readers loved them. If you followed the first tour, and now on this tour, you’ll see a lot of comments about the root monsters. They’ve almost overshadowed the main characters.

I’m here to tell you the story has some solid main characters. I’ve always gone with more stoic main characters, then used supporting characters for any light hearted moments. The stories are fun adventures in a fantasy world, but that world also includes root monsters. It just wouldn’t be the same story without them.

Part of the challenge is to find ways to exceed whatever they’ve done up to this point. Their appeal is their absurdity and sassiness. They’re along for the ride in HMS Lanternfish, and even staged a rave party aboard the ship one night. You’ll have to read the new book to find out about that part.

I’m already thinking about how to wrap this trilogy up, and have a good storyboard in production. Oddly enough, the denouement for the root monsters was one of the first parts to come to me. I guess they stuck with me, too.

If you’re up for adventure on the high seas, with root monsters included, check out the Lanternfish books. The newest one is the middle of the trilogy and is priced at 99¢ for the time being. Since this is a trilogy, you’re going to want to read book one first, but grab book two before the price goes up.

I’ll leave Teri with a cover and blurb, along with those all-important purchase links. I’m also including a poster of Lisa Burton, my personal assistant, posing with the root monsters to give you a visual. (Lisa’s the big one.) 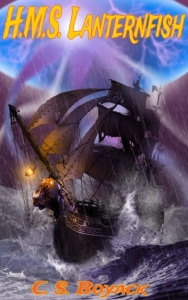 Blurb: The Lanternfish crew completed their original mission, but got exposed to a more global problem. An entire continent is at war, headed up by a head-strong young king with dreams of power, and pushed from behind by a mysterious religious order known as the Fulminites.

Rather than let their country fall under the iron boot of conquest, James and his crew set sail once more to see what kind of muscle Lanternfish can lend to the war effort. Acting precariously under an unofficial charter as a privateer, even his allies aren’t always his friends.

HMS Lanternfish explores new worlds on its way to war, and drifts considerably off course. It features an international crew of characters, and for fans of the first book, the root monsters are back, too. Tall ships, a few con games, martial arts, and everything you loved about the original book is all returning.

Hoist the colors and wheel out the guns. Lanternfish is taking to the high seas once more.

HMS Lanternfish: 99¢ for a limited time.

Voyage of the Lanternfish: Book one of the trilogy.