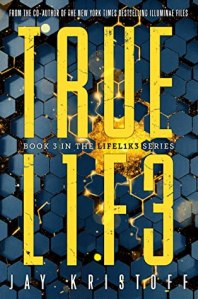 Best friends have become enemies. Lovers have become strangers. And deciding whose side you’re on could be the difference between life and death. For Eve and Lemon, discovering the truth about themselves–and each other–was too much for their friendship to take. But with the country on the brink of a new world war–this time between the BioMaas swarm at CityHive and Daedalus’s army at Megopolis, loyalties will be pushed to the brink, unlikely alliances will form and with them, betrayals. But the threat doesn’t stop there, because the lifelikes are determined to access the program that will set every robot free, a task requiring both Eve and Ana, the girl she was created to replace. In the end, violent clashes and heartbreaking choices reveal the true heroes . . . and they may not be who you think they are.

With it’s gritty, Mad Max-like world and highly charismatic characters (Lemon Fresh is so brilliful!), this has become one of my favorite YA sci-fi series.  In this final book, I was excited, yet hesitant to read it because I was afraid of what Kristoff might do to some of my favorite characters.  In several scenes, I nearly halfway covered my eyes.

Since it’s been about a year between books, I really appreciated the recap at the beginning of this novel.  It’s kind of hard to review the final book of a series without spoilers, so this will be brief.  Emotions were all over the map with this one – heart-gushing moments followed by roller coaster plunges into wildly intense action for pages.  Epic battles, cruel blindsides, devious villains with world-ending plans – I wondered if my heart could take it.  The ending satisfied me, with the exception of the fate of one character.  My feelings for this character remained conflicted for most of the series, and I’m not sure they got what they deserved.  So I guess it makes sense that I’ll probably remain undecided.