I’m about halfway through Hunting November (Killing November #2) by Adriana Mather.  Although I’m not crazy about the covers for this series, the first book was a five star read for me, and this one’s just as good.  I might have squealed when I was approved for an ARC. 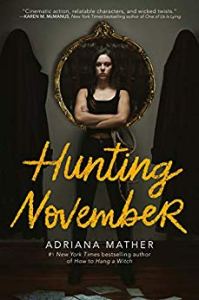 Surviving a few weeks at the world’s most lethal boarding school was one thing. But now comes the real test: Can November Adley find her missing father before her enemies find her? Subterfuge is the name of the game in this thrilling sequel to Killing November, from the #1 New York Times bestselling author of How to Hang a Witch.

After surviving a crash course in espionage at the mysterious Academy Absconditi, November has only one purpose: finding her missing father. Along with fellow student (and heartthrob) Ash, November follows the clues that her father left, embarking on the deadliest treasure hunt of her life. The first clue is in her hometown, where old friends beckon and unexpected enemies lurk around every corner. The second clue is in Europe, where revelations about her family’s history will plunge her into an international web of deception, lies, and intrigue. The third clue is deep in enemy territory, surrounded by the most skilled assassins and master strategists, and where everyone wants her and her father dead. Can one girl with limited training infiltrate a centuries-old organization that is powerful enough to topple empires? November only knows that she’ll do whatever it takes to save her father . . . or die trying.

Last weekend, I finished House of Shadows by Darcy Coates.  It had a nice gothic feel and some creepy-crawly moments.  I’d like to find some time to get to the sequel. 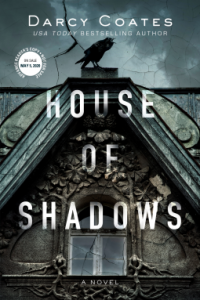 from the news when she’s offered an unexpected solution: Mr Argenton, a wealthy stranger, asks for her hand in marriage.

Marrying Mr Argenton will restore her family’s fortunes and save them from scandal, but condemns Sophie to a life in Northwood, a vast and unnaturally dark mansion situated hours from civilisation.

Sophie struggles to adjust to her new position as mistress over the desolate house. Mr Argenton’s relatives are cold, and Mr Argenton himself is keeping secrets. Even worse, the house is more than it seems.

Mr Argenton’s young cousin, Elise, draws terrifying images. Doors slam. Inhuman figures slink through the forest surrounding the house. A piano plays in the middle of the night. Blood drips from the ceilings.

Sophie is inevitably pulled towards the terrifying truth: Northwood’s ancient halls are haunted by the family’s long-dead ancestors. The malevolent spirits–produced by grisly deaths–resent her intrusion into their home.

Trapped in Northwood and desperate for an escape, Sophie’s fate is further complicated as she finds herself irrevocably drawn to the tall, dark-eyed man she married. She suspects her feelings are returned, but Mr Argenton is hiding the truth about the house–and his secrets are so dangerous that they might just be unforgivable.

Up next is Where Dreams Descend (Kingdom of Cards #1) by Janella Angeles.  Just look at that gorgeous cover.  Kind of gives off a Phantom of the Opera vibe.  The reviews have been pretty good, so I’m excited. 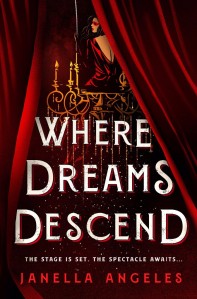 In a city covered in ice and ruin, a group of magicians face off in a daring game of magical feats to find the next headliner of the Conquering Circus, only to find themselves under the threat of an unseen danger striking behind the scenes.

As each act becomes more and more risky and the number of missing magicians piles up, three are forced to reckon with their secrets before the darkness comes for them next.

The Star: Kallia, a powerful showgirl out to prove she’s the best no matter the cost

The Master: Jack, the enigmatic keeper of the club, and more than one lie told

The Magician: Demarco, the brooding judge with a dark past he can no longer hide

Where Dreams Descend is the startling and romantic first book in Janella Angeles’ debut Kingdom of Cards fantasy duology where magic is both celebrated and feared, and no heart is left unscathed.

27 thoughts on “WWW Wednesdays: What Am I Reading? #amreading”