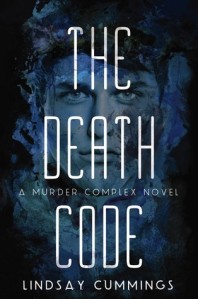 With short, fast-paced, alternating point-of-view chapters, The Death Code starts several weeks after The Murder Complex ended. Zephyr keeps the secret about Meadow close—that if she dies, The Murder Complex will be destroyed, too. Meadow, desperate to find her brother, father, and little sister, is determined to fearlessly fight to the end, even if it means sacrificing herself and her friends, new and old. The Death Code introduces a memorable cast of secondary characters and delivers a vivid and scary thrill ride read.

The final book in this duology is just as compelling as the first.  Pacing is a strong point – some of the chapters short, others longer, from two different POVs – and moves the story along briskly.  Meadow angered me several times, either because of the way she treated certain people or how selfish she could be occasionally – even by the end, I hadn’t completely forgiven her.

I was reminded of The Hunger Games with some of the challenges these characters face while in the forest.  The author really puts them through some trials and tribulations – be prepared to have your heart twisted and then stomped.

Some reviewers don’t seem to be thrilled with the ending, but I felt like it was appropriate for the characters and their situations.  Not every ending comes with a bow on top.  If you enjoy fast-paced sci-fi thrillers that will leave your head spinning, add this series to your list.