I’m currently reading Fractured Tide by Leslie Lutz.  When I saw the comp titles were two of my favorite shows, reading the rest of the description wasn’t required.  They’re perfect comparisons, and I’m hooked.

Lost meets Stranger Things in this eerie, immersive YA thriller, thrusting seventeen-year-old Sia into a reality where the waters in front of her and the jungle behind her are as dangerous as the survivors alongside her.

Sia practically grew up in the water scuba diving, and wreck dives are run of the mill. Take the tourists out. Explore the reef. Uncover the secrets locked in the sunken craft. But this time … the dive goes terribly wrong.

Attacked by a mysterious creature, Sia’s boat is sunk, her customers are killed, and she washes up on a deserted island with no sign of rescue in sight. Waiting in the water is a seemingly unstoppable monster that is still hungry. In the jungle just off the beach are dangers best left untested. When Sia reunites with a handful of survivors, she sees it as the first sign of light.

Between the gulf of deadly seawater in front of her and suffocating depth of the jungle behind her, even the island isn’t what it seems.

Haunted by her own mistakes and an inescapable dread, Sia’s best hope for finding answers may rest in the center of the island, at the bottom of a flooded sinkhole that only she has the skills to navigate. But even if the creature lurking in the depths doesn’t swallow her and the other survivors, the secrets of their fractured reality on the island might.

I just finished Lobizona by Romina Garber.  What’s inside is just as beautiful as the cover – such creative world-building.  Lobizona is about finding your place and your people in this world and learning you’re stronger than you know.  I’ll absolutely be picking up the next book in the series.

Some people ARE illegal. 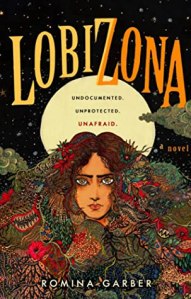 Both of these statements are false.

Manuela Azul has been crammed into an existence that feels too small for her. As an undocumented immigrant who’s on the run from her father’s Argentine crime-family, Manu is confined to a small apartment and a small life in Miami, Florida.

Until Manu’s protective bubble is shattered.

Her surrogate grandmother is attacked, lifelong lies are exposed, and her mother is arrested by ICE. Without a home, without answers, and finally without shackles, Manu investigates the only clue she has about her past–a mysterious “Z” emblem—which leads her to a secret world buried within our own. A world connected to her dead father and his criminal past. A world straight out of Argentine folklore, where the seventh consecutive daughter is born a bruja and the seventh consecutive son is a lobizón, a werewolf. A world where her unusual eyes allow her to belong.

As Manu uncovers her own story and traces her real heritage all the way back to a cursed city in Argentina, she learns it’s not just her U.S. residency that’s illegal. . . .it’s her entire existence.

Next, I’ll read House of Shadows by Darcy Coates.  I’ve said it many times – I’m a sucker for a good haunted house story.

Sophie’s world is shattered when disaster bankrupts her family. She’s still reeling from the news when she’s offered an unexpected solution: Mr Argenton, a wealthy stranger, asks for her hand in marriage. Marrying Mr Argenton will restore her family’s fortunes and save them from scandal, but condemns Sophie to a life in Northwood, a vast and unnaturally dark mansion situated hours from civilisation. Sophie struggles to adjust to her new position as mistress over the desolate house. Mr Argenton’s relatives are cold, and Mr Argenton himself is keeping secrets. Even worse, the house is more than it seems.

Mr Argenton’s young cousin, Elise, draws terrifying images. Doors slam. Inhuman figures slink through the forest surrounding the house. A piano plays in the middle of the night. Blood drips from the ceilings. Sophie is inevitably pulled towards the terrifying truth: Northwood’s ancient halls are haunted by the family’s long-dead ancestors. The malevolent spirits—produced by grisly deaths—resent her intrusion into their home.

Trapped in Northwood and desperate for an escape, Sophie’s fate is further complicated as she finds herself irrevocably drawn to the tall, dark-eyed man she married. She suspects her feelings are returned, but Mr Argenton is hiding the truth about the house—and his secrets are so dangerous that they might just be unforgivable.

26 thoughts on “WWW Wednesday: What Am I Reading? #amreading”