The aliens have landed. The humans are panicking. The scouts have 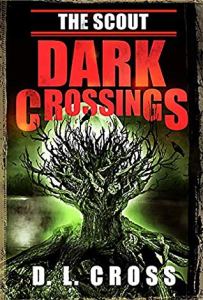 J’s mission is clear — find an alien outpost, observe, report back. Simple enough. It’s what he’s trained to do. But he’s always worked with his team, never as a party of one. Now he’s been sent out alone to blindly navigate a dense, dark forest until he finds his target. The dynamics are foreign to him, the stakes never higher. Resources are scarce. Comms are down.

And he’s found the enemy.

J is shocked when everyone’s true allegiances are revealed. And the consequences of betrayal will be deadly.

I’ve always been a fan of alien stories, and The Gate by this author was a five star read for me.  When I learned of this short story set within that world, I was anxious to get my hands on it while waiting for book two of the Astral Conspiracy series.

First, let me say The Scout stands on its own and prior knowledge of The Gate isn’t required; however, this novella is enough of a taste to whet your appetite and make you curious about the alien invasion taking place in that book.  Although a quick read, the author did a fantastic job at making me care about J.  I felt his loneliness and sense of betrayal from both his own people and the aliens.  By the end, I wanted to continue with his story – but maybe that will be an option in the future.  A reader can hope.  Now, I’ll have to return to impatiently awaiting book two of the Astral Conspiracy.