So, we’re back from Canada after a long weekend in Calgary.  We lucked out with

the weather.  According to a couple of Canadians, we arrived just in time for their heat wave with temps in the low to mid 40s.  And I was fine with that.

We had such a wonderful time!  On Friday, after a tasty dinner at an oyster house, I saw my first hockey game between the Calgary Flames and the Boston Bruins.  Four goals were scored in the first five minutes, so that was really exciting.  I also got to see the obligatory fight between players – also exciting.  The whole game wasn’t red, that was just the pre-game lighting. 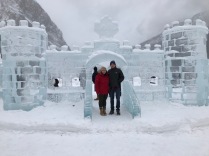 Saturday involved a trip to Fairmont Chateau Lake Louise.  What a gorgeous place.  My son warned me the hotel reminded him a little of The Overlook Hotel in The Shining.  And he wasn’t kidding.  With snow blowing sporadically and several snow drifts around it, the resemblance was more than passing.  Stunning ice sculptures were also displayed around the grounds.  The lake was frozen over and people were playing hockey, pulling their kids around on sleds, and generally just having a fantastic time.  That’s hubby and me in front of the hotel and my son and his girlfriend in front of an ice sculpture.

From there, we went to Banff and enjoyed walking around the town (left) before enjoying another scrumptious dinner.

After a memorable brunch on Sunday (a perfect day for grilled cheese and tomato soup), we enjoyed a brewery tour and visited three different distilleries.  I like beer, but don’t drink it that often.  My preference is a dark beer, but I sampled everything on this tour and discovered I’m not an IPA girl.  Didn’t care for any of them.  Maybe there are some out there I’d enjoy, but I have yet to meet them.

Something hubby and I both commented on was how downright nice Canadians are.  Everyone we encountered was polite, helpful, and eager to share information about their city.  Our son will most likely be moving there in the next six months or so, and we’re thrilled to have the opportunity to visit again.

If you’re in the Charleston, SC area this weekend, I’ll be signing books at Penned Charleston.  We lived in SC for many years, but I haven’t been to Charleston in quite a while, so I’m really excited to experience the city (and food!) again and meet some new readers.

40 thoughts on “Our #Canada Trip and #PennedCharleston”