I’m currently reading Girls With Razor Hearts by Suzanne Young.  I had my doubts about the first book in this series – mostly because of the cover – but I was familiar with the author, so I gave it a chance.  And it was a 5 star read for me.  I just started this sequel yesterday, so I’m hoping it’s just as exciting. 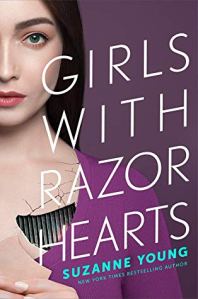 It’s time to fight back in this second novel in a thrilling, subversive near future series from New York Times bestselling author Suzanne Young about a girls-only private high school that is far more than it appears to be.

Make me a girl with a razor heart…

It’s been weeks since Mena and the other girls of Innovations Academy escaped their elite boarding school. Although traumatized by the violence and experimentations that occurred there, Mena quickly discovers that the outside world can be just as unwelcoming and cruel. With no one else to turn to, the girls only have each other—and the revenge-fueled desire to shut down the corporation that imprisoned them.

The girls enroll in Stoneridge Prep, a private school with suspect connections to Innovations, to identify the son of an investor and take down the corporation from the inside. But with pressure from Leandra, who revealed herself to be a double-agent, and Winston Weeks, an academy investor gone rogue, Mena wonders if she and her friends are simply trading one form of control for another. Not to mention the woman who is quite literally invading Mena’s thoughts—a woman with extreme ideas that both frighten and intrigue Mena.

And as the girls fight for freedom from their past—and freedom for the girls still at Innovations—they must also face new questions about their existence…and what it means to be girls with razor hearts.

Over the weekend, I finished Witches of Ash and Ruin by E. Latimer.  While it had strong themes of found family and wonderful friendships, parts of it were lacking for me.

Modern witchcraft blends with ancient Celtic mythology in an epic

clash of witches and gods, perfect for fans of V.E. Schwab’s Shades of Magic trilogy and A DISCOVERY OF WITCHES.

Seventeen-year-old Dayna Walsh is struggling to cope with her somatic OCD; the aftermath of being outed as bisexual in her conservative Irish town; and the return of her long-absent mother, who barely seems like a parent. But all that really matters to her is ascending and finally, finally becoming a full witch-plans that are complicated when another coven, rumored to have a sordid history with black magic, arrives in town with premonitions of death. Dayna immediately finds herself at odds with the bewitchingly frustrating Meiner King, the granddaughter of their coven leader.

And then a witch turns up murdered at a local sacred site, along with the blood symbol of the Butcher of Manchester-an infamous serial killer whose trail has long gone cold. The killer’s motives are enmeshed in a complex web of witches and gods, and Dayna and Meiner soon find themselves at the center of it all. If they don’t stop the Butcher, one of them will be next.

With razor-sharp prose and achingly real characters, E. Latimer crafts a sweeping, mesmerizing story of dark magic and brutal mythology set against a backdrop of contemporary Ireland that’s impossible to put down.

Next, I’ll read The Electric Heir by Victoria Lee.  In the first book of this series, The Fever King, I found the magic system original and it was full of political conflict.  I’m anxious to see what happens to these characters.

Six months after Noam Álvaro helped overthrow the despotic government of Carolinia, the Atlantians have gained citizenship, and Lehrer is chancellor. But despite Lehrer’s image as a progressive humanitarian leader, Noam has finally remembered the truth that Lehrer forced him to forget—that Lehrer is responsible for the deadly magic infection that ravaged Carolinia.

Now that Noam remembers the full extent of Lehrer’s crimes, he’s determined to use his influence with Lehrer to bring him down for good. If Lehrer realizes Noam has evaded his control—and that Noam is plotting against him—Noam’s dead. So he must keep playing the role of Lehrer’s protégé until he can steal enough vaccine to stop the virus.

Meanwhile Dara Shirazi returns to Carolinia, his magic stripped by the same vaccine that saved his life. But Dara’s attempts to ally himself with Noam prove that their methods for defeating Lehrer are violently misaligned. Dara fears Noam has only gotten himself more deeply entangled in Lehrer’s web. Sooner or later, playing double agent might cost Noam his life.

37 thoughts on “WWW Wednesdays: What Am I Reading? #amreading”