Hubby and I had a fun weekend.  We have friends over every Super Bowl, and it’s always a good time and way too much food.  I didn’t really care about the teams this year, but I always look forward to the commercials.  My favorites this year were the ones featuring Jason Momoa (don’t even remember what he was advertising because I was laughing so much), Sam Elliott for Doritos, and MC Hammer for Cheetos.  I also caught a little of the kitten bowl – so much cuteness!  I’d adopt every one of them if I could.

Friday night, we watched Rambo: Last Blood.  Unless you’re a Rambo fanatic or just want to see what becomes of the guy at the end of the series, don’t bother.  Basically, bad things happen, Rambo goes after the guys, lures them back to his home turf, and then it plays out like Home Alone, only with a much higher body count.  Still, Stallone moves pretty well for a 73-year-old.

Subject A36 is on NetGalley!  To all you bloggers and reviewers, if you have a NetGalley account and would like to read and review it, email me at tpolen6@gmail.com and I’ll send you the widget to download the book. 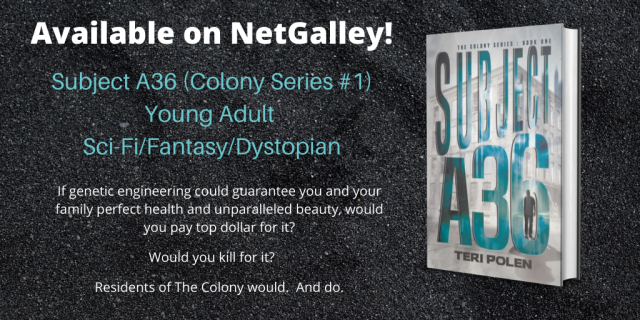 Now for another excerpt!  In this scene, Asher and Brynn are in the middle of a rescue mission and encounter two guards.  Asher has already taken care of his and turns to watch Brynn.

The guard spun around to face her, as his hand reached for the gun holstered at his side.  But before he could draw the weapon, she took a running leap and used his thigh as a springboard to propel herself up.  She hooked her right leg around his neck then used her momentum to take them both to the ground.  With his air supply cut off, he was unconscious in seconds.

She was so graceful – it was like watching a deadly ballet.

“He went down quicker than you.”

Brynn had practiced the move on me over the past few weeks, wrapping her legs around my neck dozens, possibly hundreds of times.

I grinned.  “Maybe I enjoyed it more.”

She smirked in reply.