Gregory and his little sister Imogen love spending Halloween with their parents. 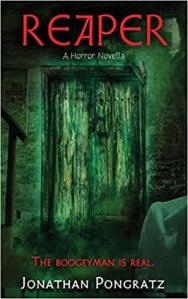 But this year is different. If he proves he can take care of Imogen all by himself, he’ll finally have the allowance he’s dreamed of.

That was before the basement door opened on its own. Before the strange door appeared in the basement and Imogen was taken from him by the monster.

Now everyone in town is blaming him for her disappearance, but no one is listening to his story. Where did the door come from? What was that creature? And most of all, can he find his sister before it’s too late, or will he bury his memories of her along with his parents?

I love a good horror story.  And that’s exacty what I found in Pongratz’s novella.

Everyone knows basements are bad news in horror books and movies.  You just want to yell at the characters to steer clear.  But if they didn’t go into the basement/attic/check on the noise outside, you’d miss out on all the scary escapades, and where’s the fun in that?  Reaper most definitely offers those scary escapades coupled with vivid imagery that may send chills down your spine.

The sibling relationship between Gregory and Imogen is done well and very believable – sweet and loving at times, and then exasperating when she teases her brother.  After the trauma of losing his sister, I liked how Greg didn’t accept the situation and give up on her, instead, beginning his own investigation and facing his fears.

The ending leaves the possibility open for another book, and I hope the author continues this story.  I’d love to know what happens next.  If you’re looking for a quick, eerie read, Reaper is a perfect book to curl up with.  And if you’re feeling brave, read it at night when you’re home alone.