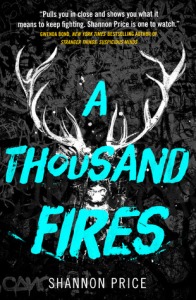 Valerie Simons knows the city’s gang wars are dangerous—her own brother was killed by the Boars two years ago. But nothing will sway her from joining the elite and beautiful Herons to avenge his death—a death she feels responsible for.

But when Valerie is recruited by the mysterious Stags, their charismatic and volatile leader Jax promises to help her get revenge. Torn between old love and new loyalty, Valerie fights to stay alive as she races across the streets of San Francisco to finish the mission that got her into the gangs.

Gang wars, revenge, and volatile leaders?  As a Sons of Anarchy fan, I couldn’t wait to read this (even though the gangs aren’t MCs).

First, let me say that it took enormous effort on my part to put down my Kindle while reading this – I was riveted.  Valerie losing her younger brother is a tragic story, and her warring emotions are well-portrayed.  Important topics such as depression, cutting, and talk of suicide are also addressed.  While much of this book is very dark, having a supportive circle of family and friends is emphasized.  The origin of the gangs is explained well, and the Stags fight against gentrification is understandable.  I found myself rooting for them – just maybe not for all the methods used in their fight.

While I felt I knew Valerie and Micah pretty well, when it came to Jax, there were still several blank spaces by the end of the book.  Valerie’s feelings for him seemed to be based on nothing more than his looks and the information he possessed that she wanted.  He’s an interesting character, and I craved more details.  The Westons and their influence were also a gray area for me, and more explanation of their involvement would have helped.

Taking the subject matter into account, don’t expect a unicorns and rainbow-type of ending, but many things are resolved.  With a compelling tale involving themes of family, revenge, betrayal, and grief, this is a fantastic debut novel, and I’ll be looking for future books by this author.