Hope had abandoned them to the wrath of all the waters. 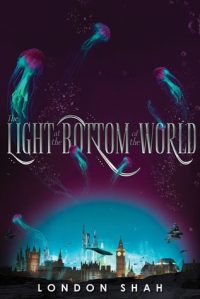 At the end of the twenty-first century, the world has changed dramatically, but life continues one thousand feet below the ocean’s surface. In Great Britain, sea creatures swim among the ruins of Big Ben and the Tower of London, and citizens waver between fear and hope; fear of what lurks in the abyss, and hope that humanity will soon discover a way to reclaim the Earth.

Meanwhile, sixteen-year-old Leyla McQueen has her own problems to deal with. Her father’s been arrested, accused of taking advantage of victims of the Seasickness-a debilitating malaise that consumes people,often claiming their lives. But Leyla knows he’s innocent, and all she’s interested in is getting him back so that their lives can return to normal.

When she’s picked to race in the action-packed London Submersible Marathon, Leyla gets the chance to secure his freedom; the Prime Minister promises the champion whatever their heart desires. The race takes an unexpected turn, though, and presents her with an opportunity she never wanted: Leyla must venture outside of London for the first time in her life, to find and rescue her father herself.

Now, she’ll have to brave the unfathomable waters and defy a corrupt government determined to keep its secrets, all the while dealing with a secretive, hotheaded companion she never asked for in the first place. If she fails, or falls prey to her own fears, she risks capture–and her father might be lost forever.

The totally stunning cover and concept of humans living at the bottom of the ocean made this a must read for me.

From the watercraft and underwater homes to the sea creatures, the world-building is magnificent.  When Leyla pilots her submersible around London landmarks and during the thrilling marathon, the imagery is outstanding.  And the conflict!  One roadblock after another is thrown into the mix, and nothing comes easy in her quest to find her father.  She’s a brave and determined protagonist, but makes some questionable decisions at times before thinking things through.  Ari is a man of mystery and caution, but a perfect balance to Leyla’s overly trusting nature.  Leila’s world is brimming with mystery and political undercurrents, and she’s forced to question many of her beliefs and things she’s been told.  And that cliffhanger will steal your breath away!

Although the pacing wavers here and there, I enjoyed this highly creative, underwater adventure and will be anxiously anticipating the next book in the series.  Add this one to your TBR!