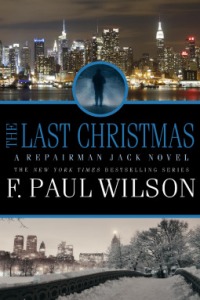 The Last Christmas is that story.

It’s late December between Ground Zero and Fatal Error, a winter of discontent for Jack who’s perhaps spending too much time hanging at Julio’s. An old contact, Edward Burkes, convinces him to take on a missing-person fix. As usual, nothing is as it seems, and the missing person isn’t exactly a person. In fact, it’s like nothing anyone has ever seen.

And in the middle of all this, the mysterious Madame de Medici hires him to safeguard a valuable object. Simple, right?

Yep, Jack is back and, as usual, weird trouble is on his heels.

Many years ago, a friend loaned me Conspiracies, the third Repairman Jack novel. I was immediately hooked and scrambled to read the first two in the series.  Since then, I’ve remained a loyal fan and have read every book, as well as Repairman Jack: The Early Years.  I was distraught when I’d believed the last book of the series had been written a few years ago – so imagine my excitement when I saw a new Jack book on NetGalley!

Repairman Jack is hands down one of the coolest characters I’ve ever read, and it was such a treat to hang out again with him, Abe, Gia, Vicky, Julio, and Parabellum again.  This latest “fix” involves some genetic engineering, but still ties in with the overall arc of the series.  Jack using his powers of “persuasion”, sweet moments with Gia and Vicky, discussions over food with Abe, nail-biting close calls – it’s all here.

This series is classified as horror – not the gore variety – but closer to supernatural occult.  If that’s even a category.  If you enjoy intelligent MCs, otherworldly themes, exciting action sequences, and memorable characters, look no further.  Repairman Jack will always be at the top of my list of favorite books.  Jack is back!