In the city of Craewick, memories reign. The power-obsessed ruler of the city, 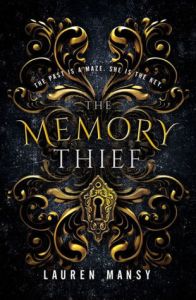 Madame, has cultivated a society in which memories are currency, citizens are divided by ability, and Gifted individuals can take memories from others through touch as they please.

Seventeen-year-old Etta Lark is desperate to live outside of the corrupt culture, but grapples with the guilt of an accident that has left her mother bedridden in the city’s asylum. When Madame threatens to put her mother up for auction, a Craewick practice in which a “criminal’s” memories are sold to the highest bidder before being killed, Etta will do whatever it takes to save her. Even if it means rejoining the Shadows, the rebel group she swore off in the wake of the accident years earlier.

To prove her allegiance to the Shadows and rescue her mother, Etta must steal a memorized map of the Maze, a formidable prison created by the bloodthirsty ruler of a neighboring Realm. So she sets out on a journey in which she faces startling attacks, unexpected romance, and, above all, her own past in order to set things right in her world.

The fascinating idea of memories being currency, the beautiful cover, and a MC in a perilous situation are what drew me to this book.

While intricate and interesting, the world-building confused me for the most part.  With a lot of moving pieces, sparse details are given about the different realms and types of Gifted.  At the end of the book is a glossary containing descriptions and explanations that would have helped while reading.  I wish it had been at the beginning of the novel instead.

Several twists are revealed at the end of some chapters, and the author did an admirable job at making me read just a little longer in one sitting to see what happened next.  That being said, things seem to fall into place a little too conveniently, which dampened the conflict and intensity for me.  The journey Etta and Reid undertake lasts a good portion of the book, and I assumed this would be the first in a series; however, the pace kicks into overdrive in the last 20% and wraps up the story in a neat bow.

The Memory Thief isn’t a bad read by any means, and several other reviewers have enjoyed it, but the ambiguous world-building and uneven pacing left me scratching my head several times.  Putting the glossary at the beginning of the book would help alleviate much of the confusion.

I received a complimentary copy of this book from the publisher through Edelweiss. Opinions expressed in this review are completely my own.