This past Friday and Saturday, I attended Heartland Book Festival in Elizabethtown, KY.  With it being the first year for this festival, there were a few hiccups here and there, but that’s to be expected with new events.  Friday was kids day, and I spoke to hoards of them.  Some were only there for the “free stuff” – their words.  But some were devoted readers and genuinely interested in hearing about the books.  One young girl about 9 or 10-years-old walking around with a tattered Eoin Colfer book tucked under her arm, eyes wide with excitement, absolutely stole my heart.  I met several other authors, which is always fun, and sat between two YA authors I really enjoyed talking to.  The local Barnes & Noble rep said they’d love to host me next February when my new book releases.  Altogether, it was a tiring weekend, but time well spent.

On the agenda for this week is trying to catch up on some reading (so behind!) and 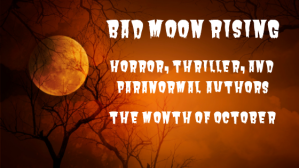 preparing more Bad Moon Rising posts.  It looks like one author won’t be participating, so I’ll have to invite someone to fill the slot.  If you know anyone interested, send them my way.

New shows are are starting this week.  I watched the new American Horror Story – a throwback to 80s horror movies – and I loved it.  Counselors working at a summer camp where bad things happened fourteen years ago – you can see where this is headed.  The clothing and hairstyles are spot on, and the soundtrack is fantastic.  I plan to try out a new show tonight, Prodigal Son, because it has a couple actors I like (one an alum of The Walking Dead).  If I get invested, it will probably be canceled.  Story of my life with most shows I like.  Speaking of TWD – October 6th starts a new season – woo-hoo!