I’m currently reading Fireborne by Rosaria Munda.  Look at these comp titles – GoT and Red Rising?  Dragons?  Your question should be why am I not reading this book?

Annie and Lee were just children when a brutal revolution changed their world, giving everyone—even the lowborn—a chance to test into the governing class of dragonriders.

Now they are both rising stars in the new regime, despite backgrounds that couldn’t be more different. Annie’s lowborn family was executed by dragonfire, while Lee’s aristocratic family was murdered by revolutionaries. Growing up in the same orphanage forged their friendship, and seven years of training have made them rivals for the top position in the dragonriding fleet.

But everything changes when survivors from the old regime surface, bent on reclaiming the city.

With war on the horizon and his relationship with Annie changing fast, Lee must choose to kill the only family he has left or to betray everything he’s come to believe in. And Annie must decide whether to protect the boy she loves . . . or step up to be the champion her city needs.

From debut author Rosaria Munda comes a gripping adventure that calls into question which matters most: the family you were born into, or the one you’ve chosen.

I just finished Slayer by Brittney Morris.  I’m not a big gamer (unless you count the arcade games I played in high school), but I still play some Xbox.  The thought of a high school student creating a game like this, keeping it a secret from everyone she knows, then having to deal with such heavy issues – I was intrigued.  This was a fantastic read, full of creative imagery within the game.

By day, seventeen-year-old Kiera Johnson is an honors student, a math tutor, and 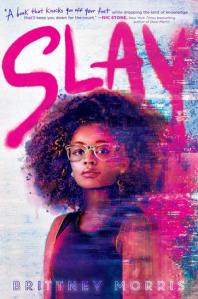 one of the only Black kids at Jefferson Academy. But at home, she joins hundreds of thousands of Black gamers who duel worldwide as Nubian personas in the secret multiplayer online role-playing card game, SLAY. No one knows Kiera is the game developer, not her friends, her family, not even her boyfriend, Malcolm, who believes video games are partially responsible for the “downfall of the Black man.”

But when a teen in Kansas City is murdered over a dispute in the SLAY world, news of the game reaches mainstream media, and SLAY is labeled a racist, exclusionist, violent hub for thugs and criminals. Even worse, an anonymous troll infiltrates the game, threatening to sue Kiera for “anti-white discrimination.”

Driven to save the only world in which she can be herself, Kiera must preserve her secret identity and harness what it means to be unapologetically Black in a world intimidated by Blackness. But can she protect her game without losing herself in the process?

I started The Gate by D.L. Cross a couple of months ago, then had to put it on hold for other reading commitments.  I’m excited to get back to it and find out about these aliens.

He lost his job. He lost his girl. Now it’s all he can do not to lose his life.

Landon Thorne is a disgraced archaeologist, a laughing stock in his field because of his unconventional beliefs – he’s an ancient astronaut theorist. No one takes him seriously.

Until an alien armada targets Earth.

Now Landon’s in high demand – by the US government and someone far more sinister.

They race across two continents to the Gate of the Gods, the one place on Earth that might give humans an advantage over the aliens. But no one is prepared for what they’ll find.

And not everyone will make it out alive.

42 thoughts on “WWW Wednesday: What Am I Reading? #amreading”