I’m currently reading Five Midnights by Ann Davila Cardinal.  I literally just started this, so I don’t have a feel for it yet.  But strange things are afoot, and I’m intrigued. 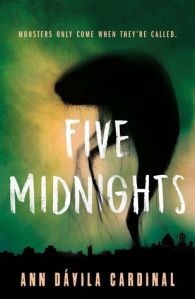 If Lupe Dávila and Javier Utierre can survive each other’s company, together they can solve a series of grisly murders sweeping though Puerto Rico. But the clues lead them out of the real world and into the realm of myths and legends. And if they want to catch the killer, they’ll have to step into the shadows to see what’s lurking there—murderer, or monster?

I finished two books on Sunday  The first was an ARC of DEV1AT3 by Jay Kristoff.  The first book in this series, LIFEL1K3, was a mindblower, and I was keeping my fingers crossed I’d receive an ARC for the second.  Although there weren’t quite as many twists in this second book, it was an action-packed thrill of a ride.

After the climactic battle in Babel, she finds herself separated from Ezekiel and Cricket in the wastelands. Lemon’s abilities to manipulate electricity mark her as a deviate, and deadly corporate operatives are hunting her to use as a weapon in the war between BioMaas Incorporated and Daedelus Technologies. Instead, Lemon finds herself falling in with a group of fellow deviates—a band of teenagers with astonishing abilities, led by an enigmatic figure known as the Major, who may hold the secrets to Lemon’s past.

Meanwhile, Cricket finds himself in possession of the puritanical Brotherhood, a religious cult set for a head-on collision with the Major and his band. Searching for Lemon, Ezekiel finds a strange ally in an old enemy, and uncovers a plot that may see him reunited with his beloved Ana.

And inside Babel, a remade Eve hatches a plan to bring an end to the world.

The second book I finished was the audio book of Children of Blood and Bone by Tomi Adeyemi for my book club.  It’s been in my TBR for too long, and with over 15K reviews and an average of over 4 stars on Goodreads, I couldn’t wait to read it.  And that cover – gorgeous!  Richly detailed world-building, and characters you’ll love.

They killed my mother.
They took our magic.
They tried to bury us.

But everything changed the night magic disappeared. Under the orders of a ruthless king, maji were killed, leaving Zélie without a mother and her people without hope.

Now Zélie has one chance to bring back magic and strike against the monarchy. With the help of a rogue princess, Zélie must outwit and outrun the crown prince, who is hell-bent on eradicating magic for good.

Danger lurks in Orïsha, where snow leoponaires prowl and vengeful spirits wait in the waters. Yet the greatest danger may be Zélie herself as she struggles to control her powers and her growing feelings for an enemy.

Next up is Recursion by Blake Crouch.  I’ve liked everything I’d read by this author, so I have no reason to think this novel will break that streak.

That’s what NYC cop Barry Sutton is learning, as he investigates the devastating phenomenon the media has dubbed False Memory Syndrome—a mysterious affliction that drives its victims mad with memories of a life they never lived.

That’s what neuroscientist Helena Smith believes. It’s why she’s dedicated her life to creating a technology that will let us preserve our most precious memories. If she succeeds, anyone will be able to re-experience a first kiss, the birth of a child, the final moment with a dying parent.

As Barry searches for the truth, he comes face to face with an opponent more terrifying than any disease—a force that attacks not just our minds, but the very fabric of the past. And as its effects begin to unmake the world as we know it, only he and Helena, working together, will stand a chance at defeating it.

But how can they make a stand when reality itself is shifting and crumbling all around them?

At once a relentless pageturner and an intricate science-fiction puzzlebox about time, identity, and memory, Recursion is a thriller as only Blake Crouch could imagine it—and his most ambitious, mind-boggling, irresistible work to date.

45 thoughts on “WWW Wednesday: What Am I Reading? #amreading”