I didn’t get as much done as I would have liked last week with the WIP, but I figured out a huge plot point that was causing some wrinkles, so taking care of that is priority one this week.  I also have the opportunity for extra writing time over the next two weeks, so I have no one but myself to blame if I waste it.  I’ll keep you updated!

Last weekend, hubby and I, along with our oldest son and his girlfriend, had the 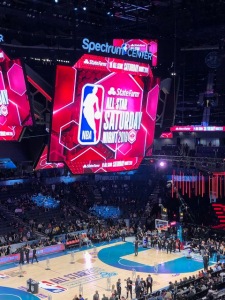 opportunity to go to the NBA All-Star games in Charlotte, NC, where we also have family.  Through hubby’s business contacts, we were extremely fortunate to have box seats.  I’m not really into basketball, but when I have the chance to spend time with my sons, I take it.  We had a fantastic time, and my son was totally starstruck at seeing LeBron James, Dirk Nowitzki, Stephen Curry, and Dwyane Wade play, but also see former greats such as Charles Barkley, Shaquille O’Neal, and Magic Johnson – who he almost literally ran into while leaving the restroom.  He was also thrilled to see a bunch of other players I didn’t know.  But I did recognize Guy Fieri from The Food Network and we passed Spike Lee coming out of a restaurant!

If you’re looking for a movie, we watched First Man last week, and it was wonderful.  Other than the obvious – Neil Armstrong being the first person on the moon – I knew nothing about his life.  Parts of it were tragic and heartbreaking, and Ryan Gosling did an outstanding job with his portrayal.  It’s definitely worth your time.