I’m currently reading Inspection by Josh Malerman.  You may know him as the author of Bird Box, a book I read several years ago – or maybe you’ve seen the movie on Netflix, and I read Unbury Carol, a kind of twisted western, last year.  When I saw he had a new release, I had to have it.

J is a student at a school deep in a forest far away from the rest of the world.

J is one of only twenty-six students, all of whom think of the school’s enigmatic founder as their father. J’s peers are the only family he has ever had. The students are being trained to be prodigies of art, science, and athletics, and their life at the school is all they know—and all they are allowed to know.

But J suspects that there is something out there, beyond the pines, that the founder does not want him to see, and he’s beginning to ask questions. What is the real purpose of this place? Why can the students never leave? And what secrets is their father hiding from them?

Meanwhile, on the other side of the forest, in a school very much like J’s, a girl named K is asking the same questions. J has never seen a girl, and K has never seen a boy. As K and J work to investigate the secrets of their two strange schools, they come to discover something even more mysterious: each other.

I recently finished To Best the Boys by Mary Weber.  Guys, this was such a good book.  It oozes girl power positivity, and every female interested in STEM should read it.  Science, secret plans, a dangerous maze – and a yummy recipe for Labyrinth Cookies at the end!

Every year for the past fifty-four years, the residents of Pinsbury Port receive a

mysterious letter inviting all eligible-aged boys to compete for an esteemed scholarship to the all-male Stemwick University. Every year, the poorer residents look to see that their names are on the list. The wealthier look to see how likely their sons are to survive. And Rhen Tellur opens it to see if she can derive which substances the ink and parchment are created from, using her father’s microscope.

In the province of Caldon, where women are trained in wifely duties and men are encouraged into collegiate education, sixteen-year-old Rhen Tellur wants nothing more than to become a scientist. As the poor of her seaside town fall prey to a deadly disease, she and her father work desperately to find a cure. But when her Mum succumbs to it as well? Rhen decides to take the future into her own hands—through the annual all-male scholarship competition.

With her cousin, Seleni, by her side, the girls don disguises and enter Mr. Holm’s labyrinth, to best the boys and claim the scholarship prize. Except not everyone’s ready for a girl who doesn’t know her place. And not everyone survives the maze.

Next, I’ll read The Sandcastle Empire by Kayla Olsen.  The theme for this month’s book club is YA books made/being made into movies/TV.  This one was in my TBR, and has been optioned by Paramount Pictures, with Leonardo DiCaprio set to co-produce. 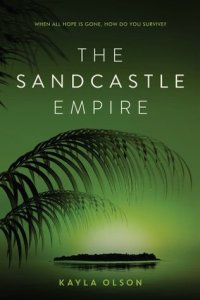 When all hope is gone, how do you survive?

Before the war, Eden’s life was easy—air conditioning, ice cream, long days at the beach. Then the revolution happened, and everything changed.

Now a powerful group called the Wolfpack controls the earth and its resources. Eden has lost everything to them. They killed her family and her friends, destroyed her home, and imprisoned her. But Eden refuses to die by their hands. She knows the coordinates to the only neutral ground left in the world, a place called Sanctuary Island, and she is desperate to escape to its shores.

Eden finally reaches the island and meets others resistant to the Wolves. But their solace is short-lived when one of Eden’s new friends goes missing. Braving the jungle in search of their lost ally, they quickly discover Sanctuary is filled with lethal traps and an enemy they never expected.

This island might be deadlier than the world Eden left behind, but surviving it is the only thing that stands between her and freedom.

27 thoughts on “WWW Wednesday: What Am I Reading? #amreading”