It’s been a while since I’ve done one of these posts.  With NaNo, I didn’t have much time, then there were the holidays, then other posts were scheduled for Monday.  Anyhoo – nice to see you guys again!  Let’s catch up.

Back in early December, hubby and I took a long weekend and went to Clearwater 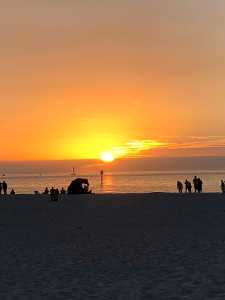 Beach in Florida.  We’d never been there before, and someone recommended it to us.  The first day was absolutely gorgeous, and I spent most of it in my happy place – chair, beach, umbrella, and book.  Enough said.  And just look at the gorgeous sunset we witnessed that night!

The next day was rainy, but we were prepared, and spent a night at Universal Studios – my next favorite happy place.  Anytime I can be in Harry Potter World is time well spent, in my opinion.  Saw a magnificent light show at Hogwarts Castle that night – amazing how they can do that.  The trip was a nice distraction from all the holiday stress, and we had a great time. 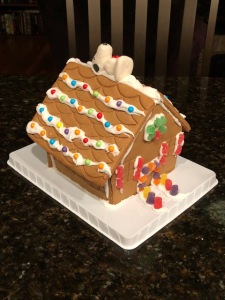 Don’t know about you guys, but gifted baker isn’t part of my skill set.  If I’m making something, it’s either from a recipe, or I’m reading instructions on a box.  I saw these Peanuts gingerbread house kits at Kroger, was feeling adventurous, and thought it would be fun to give it a shot.  Two friends and I did them together (one got pretty competitive), and we had a blast.  I’ll never win any baking competitions or cake decorating contests, but it was fun.  Like my Snoopy on top?

Four different people over the span of a week recommended You on Netflix.  After my son texted me about it the other night, I knew I had to watch it.  And I’m hooked.  Have you guys seen it?  It’s based on the book by Caroline Kepnes.  Here’s the blurb:

What would you do for love? For a brilliant male bookstore manager who crosses

paths with an aspiring female writer, this question is put to the test. A charming yet awkward crush becomes something even more sinister when the writer becomes the manager’s obsession. Using social media and the internet, he uses every tool at his disposal to become close to her, even going so far as to remove any obstacle –including people — that stands in his way of getting to her.

Have a great week!

48 thoughts on “#Vacation, #Peanuts, and #YouNetflix”