When a stranger gives Analiese Jordan a list of names before he dies, the last 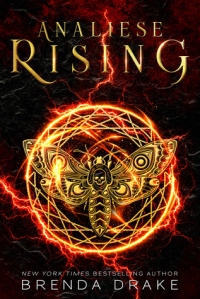 thing she expects to see is her own on it. Not. Cool. Her search for answers leads to the man’s grandson, Marek, who has dangerous secrets of his own. Both are determined to unlock the mystery of the list.

But the truth is deadly. Analiese is a descendant of the God of Death, known as a Riser, with the power to raise the dead and control them. Finding out she has hidden powers? Cool. Finding out she turns corpses into killers? No, thank you.

Now the trail plants her and Marek in the middle of a war between gods who apparently want to raise an army of the Risen, and Analiese must figure out how Aongto save the world—from herself.

The beautiful cover first caught my attention, but the mythology theme clinched it for me – I needed to read this book.

Along with Analiese and Marek, I enjoyed trying to figure out the obscure clues left by Marek’s grandfather, and the beautiful and sometimes dangerous locations where those clues lead.  The pacing is brisk, with little downtime between action scenes.  As a mythology fan, the numerous gods and goddesses thrilled me – but so many of them are mentioned, I quickly lost track.

Analiese is likable, and finds herself in many intense, life-threatening situations, but her internal thoughts about Marek’s smile or how he looks at her during these moments pulled me out of the scene more than once.  Until almost the end of the book, I never got the feeling he considered her more than a friend.  Flying across the world with Marek, someone Analiese has known only a couple of days, then successfully hiding that fact from her mother requires a sizable suspension of disbelief.

If a fast pace, nearly non-stop action, quests, and puzzles are your thing, you may enjoy Analiese Rising, but I’d recommend jotting down the gods and goddesses names to keep them straight.

Thanks to NetGalley and the publisher for the ARC.  I voluntarily read and reviewed an advanced copy of this book. All thoughts and opinions are my own.

13 thoughts on “Analiese Rising by Brenda Drake #bookreview #YA #fantasy”