The summer before her junior year, paleontology geek Natalie Page lands a 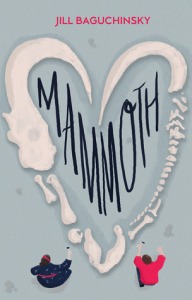 coveted internship at an Ice Age dig site near Austin. Natalie, who’s also a plus-size fashion blogger, depends on the retro style she developed to shield herself from her former bullies, but vintage dresses and perfect lipstick aren’t compatible with prospecting for fossils in the Texas heat. But nothing is going to dampen Natalie’s spirit — she’s exactly where she wants to be, and she gets to work with her hero, a rock-star paleontologist who hosts the most popular paleo podcast in the world. And then there’s Chase the intern, who’s seriously cute, and Cody, a local boy who’d be even cuter if he were less of a grouch.

It’s a summer that promises to be about more than just mammoths.

When Natalie’s hero turns out to be anything but, and steals the credit for one of her accomplishments, Nat has to unearth the confidence she needs to stand out in a field dominated by dudes. To do this, she’ll have to let her true self shine, even if that means defying all the rules for the sake of a major discovery.

Although I’m not usually a big reader of YA contemporary, after reading the blurb for Mammoth, there’s no way I could pass it up.  I’m kind of a dino nerd – given, there aren’t dinosaurs in this book, but it was close enough for me.

Let me say up front – if you have daughters or know girls who are interested in STEM, steer them toward this book.  It strongly encourages girls to display their intelligence front and center, pursue their goals, and be themselves.  After they read it, encourage them to make better choices than Natalie.  She makes one bad decision after another and frustrated me – but she’s such a relatable, personable protagonist that I forgave her.  In her defense, she has good intentions, and also owns up to everything.  Nat’s character arc is incredible, and she’ll charm you from the first page.

Mammoth also contains some standard tropes that are difficult to get away from in YA – a love triangle, a rich, mean girl, and an awesome guy who maybe really isn’t, but all the supporting characters are well-written.

Thanks to the publisher and Edelweiss for the ARC.

17 thoughts on “Mammoth by Jill Baguchinsky #bookreview #YA #contemporary #TuesdayBookBlog”