I don’t know about you guys, but it’s a rainy Monday morning here.  It’s been several weeks since we’ve caught up, so let’s do something about it.  This will be a quick post – meant to write it yesterday, but life got in the way. 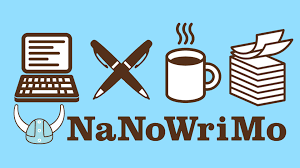 totally not.  But – this is my first time participating in NaNoWriMo, and I’ve met my word count goal every day so far!  For someone who struggled to get 500 words per day two months ago, it’s a huge achievement, and I have such a feeling of accomplishment after recording my progress every day.  My biggest obstacle to word count in the past was editing.  Going back over what I’d written the previous day, then taking far too long choosing the perfect descriptive words was sucking up valuable writing time.  First drafts are messy, and no one but the writer should ever be put through the torture of reading them – but when they’re finished, you’ve got the bones of a story, and something to work with.

I haven’t made it to the movie theater in weeks, and there are several movies (Bohemian Rhapsody, First Man) I’d like to see – but it just didn’t work out schedule wise.  However, it’s a safe bet that I’ll show up for The Crimes of Grindelwald.  I mentioned several weeks back that this season’s American Horror Story looked promising, and with only one episode to go, it’s at the top of my favorites.  Sarah Paulson and Kathy Bates are always a pleasure to watch, but a new actor to the series has really impressed me this season – Cody Fern.  He’s enthralling as Michael, and he’s  steals every scene.  Okay, yes, he’s playing the Antichrist, but he does it so well.

Fern also turned up in the last season of House of Cards.  I’d looked forward to this final season, with all the backstabbing (sometimes literally), political maneuvering, manipulation, and deceit.  Kevin Spacey wasn’t in these last episodes – but everything was about his character.  I’d hoped it would be Claire’s (Robin Wright) story, and it was such a disappointment.  When all was said and done, I actually yelled out loud in disappointment.  No many unanswered questions.  It definitely ended with a whimper.

Have a great week, and if you’re participating in NaNoWriMo, hang in there!

29 thoughts on “#NaNoWriMo and #AmericanHorrorStory”