WELCOME TO THE NEAR FUTURE, where good and honest 8/18 citizens can 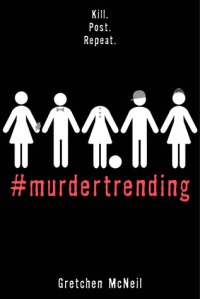 enjoy watching the executions of society’s most infamous convicted felons, streaming live on The Postman app from the suburbanized prison island Alcatraz 2.0.

When eighteen-year-old Dee Guerrera wakes up in a haze, lying on the ground of a dimly lit warehouse, she realizes she’s about to be the next victim of the app. Knowing hardened criminals are getting a taste of their own medicine in this place is one thing, but Dee refuses to roll over and die for a heinous crime she didn’t commit. Can Dee and her newly formed posse, the Death Row Breakfast Club, prove she’s innocent before she ends up wrongfully murdered for the world to see? Or will The Postman’s cast of executioners kill them off one by one?

With ‘reality’ television so prevalent in society, the premise of this book is dark and disturbing – and yet, if you squint hard enough, you could almost see this happening in the not too distant future.  Which is terrifying.

Knowing that the characters could be killed at any moment makes this read even more thrilling, and you may want to remain detached.  Which is a difficult thing to do, because some of these characters are so charming (Ethan).  The cast of executioners is especially entertaining in a twisted way, with each of them having their own style of dress and preferred killing techniques.  Reading the varying opinions of the show in streaming fan discussions presents different theories about what may actually be going on, and the odds of the criminals  staying alive at the end of some chapters is a nice touch.

I struggled a bit with Dee’s sudden transformation from a wide-eyed newbie to a hardened badass, but it did offer some rewarding moments at certain points of the story.

With gruesome scenes, gore, and some language, this isn’t a book I’d recommend to the younger YA crowd, but for older YA readers, this is a compelling, unique concept that offers several surprises.  #Murdertrending is scheduled for publication August 7th, 2018.

Thanks to NetGalley and the publisher for the digital ARC.

10 thoughts on “#MurderTrending by Gretchen McNeil #bookreview #YA #thriller #TuesdayBookBlog”