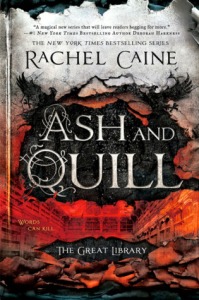 Hoarding all the knowledge of the world, the Great Library jealously guards its secrets. But now a group of rebels poses a dangerous threat to its tyranny…

Jess Brightwell and his band of exiles have fled London, only to find themselves imprisoned in Philadelphia, a city led by those who would rather burn books than submit. But Jess and his friends have a bargaining chip: the knowledge to build a machine that will break the Library’s rule.

Their time is running out. To survive, they’ll have to choose to live or die as one, to take the fight to their enemies—and to save the very soul of the Great Library…

I’ve been a fan of this series from book one, and I’m surprised it’s not more popular among readers.  Besides having colorful, gorgeous covers, it boasts a wonderfully inclusive cast of characters.

Character development continues to be a strong point with this series, and I’ve grown to care even more about these characters after this book.  Although not blood-related, with all they’ve been through, they’ve become a family of sorts, and have learned to rely on and trust each other while fighting for survival.  And that’s why the ending of this book may rip your heart out.  That’s all I’ve got to say about that.

With this being the middle novel of the series, I felt it was a bit slow and repetitive in places, and not much happens in the first half.  That being said, I’ve already started the next book, Smoke and Iron, and it certainly makes up for it.

This series offers something for everyone – action, a bit of romance and history, power struggles, both clever and untrustworthy characters, and a heaping load of suspense.