WELCOME TO THE NEAR FUTURE, where good and honest 8/18 citizens can enjoy watching the executions of society’s most infamous convicted felons, streaming live on The Postman app from the suburbanized prison island Alcatraz 2.0.

When eighteen-year-old Dee Guerrera wakes up in a haze, lying on the ground of a dimly lit warehouse, she realizes she’s about to be the next victim of the app. Knowing hardened criminals are getting a taste of their own medicine in this place is one thing, but Dee refuses to roll over and die for a heinous crime she didn’t commit. Can Dee and her newly formed posse, the Death Row Breakfast Club, prove she’s innocent before she ends up wrongfully murdered for the world to see? Or will The Postman’s cast of executioners kill them off one by one?

I just finished Scream Site by Justina Ireland.  It’s classified as YA, but reads like MG, so I was a bit disappointed.  The ending had a definite Scooby-Doo feel.

Sabrina Sebastian’s goal in life is to be an investigative reporter. For her first big 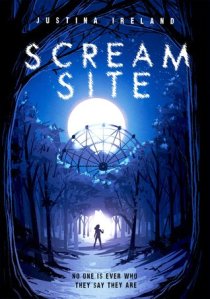 story, she researches a popular website called Scream Site, where people post scary videos and compete for the most “screams.” While Sabrina’s friends and her sister, Faith, talk nonstop about the creepy viral videos, Sabrina just hopes that covering this trend will get her the internship she’s wishing for. But as she digs into the truth behind the website, she begins to suspect that these aren’t only aspiring actors and videographers at work. Some clips seem a little too real. And when Faith goes missing, Sabrina must race against time to save her sister from becoming the next video “star.”

Next, I’ll read Timekeeper by Tara Sim for one of my book clubs.  The theme is LGBT books and this one has been in my TBR for a while, so it was a perfect time to move it to the top.

An alternate Victorian world controlled by clock towers, where a damaged clock can fracture time—and a destroyed one can stop it completely.

A prodigy mechanic who can repair not only clockwork but time itself, determined to rescue his father from a Stopped town.

A series of mysterious bombings that could jeopardize all of England.

A romance that will shake the very foundations of time.

32 thoughts on “WWW Wednesday: What Am I Reading? #amreading”