Not much has changed from a couple of weeks ago.  Sanctuary took me longer than I’d planned (kids home from college), and then I was approved for a book on NetGalley that I had to start immediately because of the archive date.

I’m currently reading Ruthless Magic (Conspiracy of Magic #1) by Megan Crewe.  This has just been an okay read so far at 60%.  An abundance of action, diverse, likable characters, but something seems to be missing, and I can’t put my finger on it.

In the contest to keep their magic, the only options may be die… or kill. 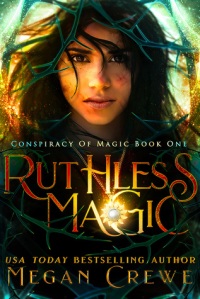 Each year, the North American Confederation of Mages assesses every sixteen-year-old novice. Some will be chosen. The rest must undergo a procedure to destroy their magical ability unless they prove themselves in the mysterious and brutal Mages’ Exam.

Disadvantaged by her parents’ low standing, Rocío Lopez has dedicated herself to expanding her considerable talent to earn a place in the Confederation. Their rejection leaves her reeling—and determined to fight to keep her magic.

Long ashamed of his mediocre abilities, Finn Lockwood knows the Confederation accepted him only because of his prominent family. Declaring for the Exam instead means a chance to confirm his true worth.

Thrown into the testing with little preparation, Rocío and Finn find themselves becoming unlikely allies—and possibly more. But the Exam holds secrets more horrifying than either could have imagined. What are the examiners really testing them for? And as the trials become increasingly vicious, how much are they willing to sacrifice to win?

The first in a new series by USA Today bestselling author Megan Crewe, Ruthless Magic combines the magic of Harry Potter with the ferocity of The Hunger Games alongside a poignant romance. Fans of Cassandra Clare and Holly Black, look no further for your next urban fantasy fix!

I just finished Sanctuary by Caryn Lix.  Highly recommend this one – inclusive cast of characters, aliens, teens with powers.  What’s not to love?

Alien meets Alexandra Bracken’s The Darkest Minds in this thrilling debut novel about prison-guard-in-training, Kenzie, who is taken hostage by the superpowered criminal teens of the Sanctuary space station—only to have to band

together with them when the station is attacked by mysterious creatures.

Kenzie holds one truth above all: the company is everything.

As a citizen of Omnistellar Concepts, the most powerful corporation in the solar system, Kenzie has trained her entire life for one goal: to become an elite guard on Sanctuary, Omnistellar’s space prison for superpowered teens too dangerous for Earth. As a junior guard, she’s excited to prove herself to her company—and that means sacrificing anything that won’t propel her forward.

But then a routine drill goes sideways and Kenzie is taken hostage by rioting prisoners.

At first, she’s confident her commanding officer—who also happens to be her mother—will stop at nothing to secure her freedom. Yet it soon becomes clear that her mother is more concerned with sticking to Omnistellar protocol than she is with getting Kenzie out safely.

As Kenzie forms her own plan to escape, she doesn’t realize there’s a more sinister threat looming, something ancient and evil that has clawed its way into Sanctuary from the vacuum of space. And Kenzie might have to team up with her captors to survive—all while beginning to suspect there’s a darker side to the Omnistellar she knows.

What I’m reading next is the same as last time – The Wish Granter by C.J. Redwine.  And I have until next Tuesday, because that’s when book club meets.

The world has turned upside down for Thad and Ari Glavan, the bastard twins of Súndraille’s king. Their mother was murdered. The royal family

died mysteriously. And now Thad sits on the throne of a kingdom whose streets are suddenly overrun with violence he can’t stop.

Growing up ignored by the nobility, Ari never wanted to be a proper princess. And when Thad suddenly starts training Ari to take his place, she realizes that her brother’s ascension to the throne wasn’t fate. It was the work of a Wish Granter named Alistair Teague who tricked Thad into wishing away both the safety of his people and his soul in exchange for the crown.

So Ari recruits the help of Thad’s enigmatic new weapons master, Sebastian Vaughn, to teach her how to fight Teague. With secret ties to Teague’s criminal empire, Sebastian might just hold the key to discovering Alistair’s weaknesses, saving Ari’s brother—and herself.

But Teague is ruthless and more than ready to destroy anyone who dares stand in his way—and now he has his sights set on the princess. And if Ari can’t outwit him, she’ll lose Sebastian, her brother…and her soul.

20 thoughts on “WWW Wednesdays What Am I Reading? #amreading”