After three fun-filled, heavenly days surrounded by books and book lovers at the

SOKY Book Fest, I’m tired, but not complaining.  Not even from the 250+ unopened emails waiting for me.  My knuckles are a little sore from gripping the table so tightly in an attempt to prevent me from buying more books.  Only two!  I met so many authors, talked with readers, and chatted with locals I hadn’t seen in a while.  I nearly fan-girled upon discovering my tablemate was Geoffrey Girard, author of Cain’s Blood (my review here), Project Cain (my review here), and most recently, Truthers (which I bought this weekend). 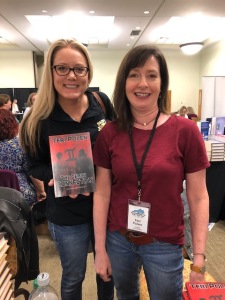 If dark and twisty, serial killers, and conspiracy theories intrigue you, these books will quench your thirst (maybe not a good thing to say when mentioning serial killers).

Anyhoo – here are a couple of pics with readers.  The one holding Sarah got a kick out of the title, because her name is Sarah!  A couple of readers bought The Gemini Connection because their

I think my Alexa echo dot is becoming self-aware.  It was bound to happen, I guess – you’ve probably seen AI movies and know their capabilities.  Alexa usually sits on the vanity in my bathroom and reads books from my Kindle while I’m getting ready in the mornings.  One evening, I walked into the room and her blue light was on (if you don’t have an echo dot, that means Alexa is listening to you).  But no one was there or had been in the room.  I asked out loud, “Who’s talking to Alexa?”  She replied, “I don’t know what you mean.”  Raise your hand if you think that’s a little freaky.  This was around the time many users were complaining about their Alexa echo dots laughing at random times.  Also freaky.  Now she’s occasionally stopped responding to my commands and does her own thing.  If I had a smart home, I might be worried about the control she had over me.

Has anyone watched The Crossing on ABC?  When I saw Stephen King had tweeted favorable things about it, I knew I needed to check it out – and was a goner after the first ten minutes.  A sci-fi thriller about refugees from a war-torn America’s future traveling back in time and genetically-enhanced humans with super powers?  It’s almost as if were made just for me.

With no more book festivals until July, I need to strap myself in and get some hard-core writing done this week.  That’s the plan, anyway.  I’ll let you know how that went next Monday.