Edmund and Mary Wilder are very much in love. But the death of their young son, 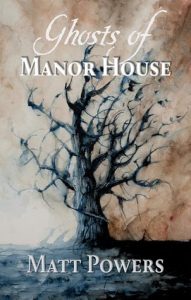 Tommy, has shattered their family. Edmund is determined to bring them back together, drawing on the only bit of strength he has left—his love for Mary and their daughter, Stephanie. But Mary sinks deeper into depression while little Stephanie’s anger grows. Edmund flounders in his attempts to rescue his family from the brink of collapse and doesn’t know where to turn.

Then Mary receives an invitation for the family to become guests at Manor House, a seemingly quaint Bed and Breakfast. This, she assures her husband, is the answer to all their troubles.

Edmund arrives ahead of his family to spend a couple days working on his long-delayed novel. But his growing curiosity about the old house leads Edmund to an encounter that will change him forever.

What will you sacrifice for love?

An old fashioned psychological thriller with a nod to Stephen King, Manor House will keep you guessing and compel you to turn the page to the very end.

A mother will sacrifice anything for her children. A husband will risk everything to save his wife. Manor House will take them all. – Goodreads.com

Give me a book featuring an eerie house and I’m a happy reader.  Ghosts of Manor House appealed to me based on the title alone.

The author does a wonderful job at conveying the emotions of grieving parents who’ve lost a child – my heart broke for them.  I also liked how the gruesome history of the tree was established in the prologue and gives a foundation for the mysterious happenings.  Once the family arrives at the house, you just know nothing good is going to happen.

After the first few chapters, there’s a sudden shift and for a while, it allows the reader to feel disoriented along with Edmund.  It’s easy to predict the path this story will take, but there are some tense, chilling moments along the way.

The book contains some formatting errors here and there, with two different characters speaking and the dialogue on the same line (which can be a little confusing), and sentences split between paragraphs.  Occasionally, the dialogue is somewhat repetitious.

This book doesn’t contain gore – it’s more atmospheric, with almost a gothic feel, so if you’re not a horror fan, don’t let that deter you from reading.  Although a quick read, Ghosts of Manor House contains powerful, heavy emotions and is a haunting, grim tale.

I received a copy of this book through Rosie’s Book Review Team.