My guest today is Rebecca Howie, author of the Sam Beckett young adult mystery series.  The first book, The Game Begins, was released in February 2016, and  Rebecca joins us today on her blog tour to promote book two, A Woman Scorned, scheduled for release on December 10th.  Preorder your copy at Amazon! 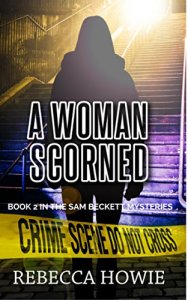 Returning home days after leaving town wasn’t a decision Sam Beckett made lightly, and the newspaper articles detailing her shooting aren’t making her choice any easier to accept.

When a therapist is found dead in her office, Sam decides to work with CID and Detective Marshall on the case, hoping that the dead woman’s troubles will be enough to help her forget her own. but with Dr Weiss’ perfect image slowly crumbling as the investigation progresses, Sam finds that she isn’t the only person hiding behind a lie, and that uncovering someone else’s could have been what led Dr Weiss to her death.

Where did you get the idea for a 17-year-old private investigator?
Sam wasn’t a PI when I started the earlier versions of The Game Begins, but as I started planning out the story and realised I was having fun writing her, I decided I didn’t want that to be her first and last outing.

The idea of making her a PI came from a book I was reading at the time which had a private investigator as the main character, and it was a nice change of pace from the usual mystery novels I read so I asked myself if I could make that work for Sam instead of skipping a few years and making her a real detective.

Which characters were the most and least difficult to write?

The most difficult to write this time around was Sam, which was unexpected because I was looking forward to writing the sequel and catching up with her. But I hadn’t planned for The Game Begins to be a full-length novel or to make it a series, so looking back on it now, it’s not really a surprise that it took me so long.

Least difficult to write was Natasha Morton, another detective in CID, and Marshall’s colleague. She’s the complete antithesis of your typical detective, and I liked that she always has something sarcastic to say even when everyone else is feeling miserable about the lack of progress on their investigation.

What was one of the most surprising things you learned while writing this series?

That’s probably how much planning actually goes into a mystery novel- although I learned a ton of other stuff while doing research.

Will there be any more books in this series?

There will be, but I have no idea how many. I don’t like planning ahead, and I don’t want to know how it’s going to end before I get there.

Which Hogwarts house do you consider yourself to be in?

I like the red and gold of Gryffindor, so I’ll say that.

What is your favorite dessert? 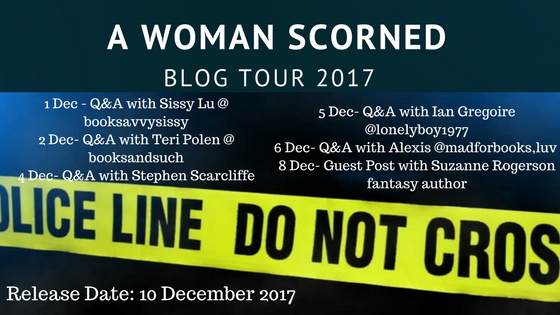