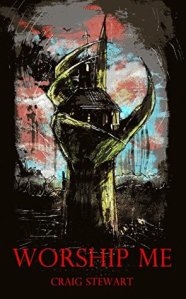 Something is listening to the prayers of St. Paul’s United Church, but it’s not the god they asked for; it’s something much, much older.

A quiet Sunday service turns into a living hell when this ancient entity descends upon the house of worship and claims the congregation for its own. Trapped in what used to be their sanctuary, the terrified churchgoers are given an impossible ransom: their new god wants a sacrifice. For everyone to live, a child must die.

As fear rips the congregation apart, it becomes clear that if they’re to survive this untold horror, the faithful must become the faithless and enter into a battle against God itself. But as time runs out, they discover that true monsters come not from Heaven or Hell… they come from within.

Though the new Leatherface (from the demented team who brought us Inside) is just on the horizon, I’d have to say my favourite horror film that I’ve actually seen this year was IT. The film wasn’t quite the book, but it’s just such a funhouse of ghastly delights, I was smile-screaming the whole way through. Though, it’s strange they based it in the 80s without taking advantage of “99 Red Balloons”.

I once dressed up as my favourite film (and book) psycho-fan, Annie Wilkes. As I strolled through the bar in a blue denim dress and wig, with a silver cross hanging around my neck, I heard people say “What? Huh? Who’s that?” Then I lifted the sledgehammer into view and they all went “Ooooooh, number one fan… Got it,” and instinctively guarded their ankles.

If I’m being honest, I have yet to hear a paranormal encounter that I actually believe. Strange thing to say for a horror writer. What I do believe is that ghost stories are emotionally true. The fear is real. The memories are real. So, in a way, I do believe in ghosts, if ghosts are the memories that refuse to let us go.

Edward Scissorhands… His topiaries would haunt me.

The one without the razor blades, please.

It’s a cliché, but I really did always want to be a writer (also, filmmaker). So, let’s say storyteller. With that in mind, would you indulge me in a quick story? When I was but a wee thing, my public school had a creative writing contest. We would write for 10 minutes, then partner up and proofread each other’s work for another 10. However, I was partnered with a good friend who didn’t care that much about writing. So, I wrote for 10 minutes, then, instead of proofreading, I wrote my friend’s story as well. After a few sessions like this, we all read each other’s stories and then voted real democratically to see who should go to this Young Writer’s Retreat thing. My friend won. He won with my story, but I couldn’t say anything. I just watched him walk out of the classroom to attend his seminar with my story under his arm. Pretty sure my pencil snapped in half in my hands right then and there.

I’d go back to public school. I wouldn’t just sit silently in class while my friend walked out of the room. I’d stand right up and yell, “That’s not his story, that’s my story! I wrote that thing! Not HIM! ME!”… kind of petty, but that’s what I’d do.

Or, you know, smother baby Hitler. I’d do one of those two things.

After finishing Worship Me, I made a short film called From: Santa, about a mall Santa who’s determined to make a little girl’s Christmas wish come true, even if it kills him, which it probably will. Now I’m writing another novel that’s a semi-sequel to Worship Me. It expands on the world the first book introduced and delves deeper into the mythology of The Beast. Also, it’s a love story, or, anti-love story, to be more accurate.

For sure it’s Barker. I devour his books. He is so eloquently disturbing. His monsters are so well spoken, so sympathetic. He can make you weep, squirm, scream and somehow still leave you all hot and bothered. Out of all of his works, I find myself going back to Coldheart Canyon the most, for some mysterious reason.

Not that I think I could have written it, but I loved The Wasp Factory by Iain Banks. There were parts of that book that made me physically dizzy from the sheer horror and how it’s delivered. Beyond being a great read, it’s also a very dark and gutsy exploration of gender identity. And that’s what’s so strong about it, there’s purpose behind the horror, which really makes it ever more horrific.

No rest for the wicked, as they say. I never stop. There’s always something new in my head begging to be birthed, so as soon as the wound heals, I crack open my skull again and start pushing.

Of my published work, I’m quite fond of a character named Clara from Worship Me. She’s a simple, goodhearted woman who society never made time for. After all, she seems a little bland on the surface: a single, church-going school teacher who spends her days in daydreams. But Clara has secrets. And she has potential. She’s a teacher, true, she’s also unquestionably a hero. I liked writing her, because I liked how she surprised me.

Once you write something, you have to get someone to read it. That’s always a struggle when you’re just starting out. Struggle? No, it’s heartache. Trying to find agents or publishers is like watching your kid go up on stage to do a tap-dance for the judges, or, at least they would have done a tap-dance if the judges didn’t interrupt halfway through with a megaphone screaming, “Next!” If I could change one thing, it would be for someone to watch my kid tap-dance.

the rhyme, “One, two, Freddy’s coming for you.” He’s a creator and connoisseur of everything horror; never afraid to delve into the dark. His written works include short stories, film scripts, articles, as well as his first horror novel, Worship Me, recently published by Hellbound Books. He has also written and directed several short horror films that have enjoyed screenings across North America.