For those of you who aren’t avid readers of horror, maybe short stories are the way to enter those waters a few inches at a time before fully immersing yourself.  Today’s author offers that opportunity with his book of 18 short stories.  Welcome, Jack Binding! 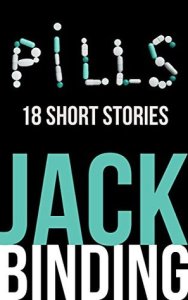 From the vicious high fashion horror of FMM (The Devils Wears Prada via Bret Easton Ellis-esque debauchery) to the stark, unsettling heartbreak of Sleeping Pills, Binding takes the reader on a journey through the secret parts of London that few people ever visit.

With overarching themes and characters, the 18 short stories in Pills can be read either as a whole enjoyed as stand-alone tales.

At the time of writing this interview, I’m still yet to see the latest adaptation of Stephen King’s It, which has been getting some rave reviews and breaking box office records. I’d probably say it was Lights Out. I’m not a huge fan of jump scares, and although it has a few, it doesn’t rely on them like, say, Paranormal Activity does. It has real heart and real menace. Loved it.

I’m not big on fancy dress, so whenever I go to Halloween parties, I wear my regular clothes. Whenever anyone asks why I’m not in costume, I just say, “I’m actually a goth.”

There’s a story in Pills called ‘Twenty-Seven.’ At one point in the tale, the narrator has a (possibly drug-induced) vision of a paranormal entity. He then goes on to make a bargain with the creature. Believe it or not, it’s actually based on something that happened to me in my early twenties. I’m not sure if it was a dream or whatever. And although I don’t really believe the supernatural – you’ll notice in my writing, the real monsters are the humans – it didn’t really feel like a dream. I’m not sure what it was. It haunted me ever since. Writing about it was a way of dealing with the experience.

I am working on a very, very dark thriller. It’s a full-length project, which should please the people who have been asking me for something more substantial (although I’d argue there’s enough in Pills to satisfy most readers). It’s about a guy who kills an innocent person in a fit of rage, and the resulting fallout from it. I’m on the third draft right now.

There are several. I’d love to creep my readers out as much as I was the first time I read Stephen King’s Pet Sematary. But then I’m also in awe of the feeling of utter dread that runs through JG Ballard’s Super-Cannes.

I can’t wait to finish what I’m writing mainly because there are so many new projects waiting to be started. I have no shortage of ideas, just shortage of time in which to write then. That’s why short stories appeal to me – I can move onto the next idea quickly.

My first inclination is to say I’d have like to have started earlier. I wrote my first full length novel when I was twenty-nine. It’s a miserable piece of incoherent trash, and will never see the light of day. However, the practice helped me craft my style and find my voice. People often believe it’s life experience that affects a person’s ability to write. BS, I say – it’s practice and hard work.

Jack Binding comes from London but lives in Sydney. He writes dark fiction that

He regularly releases short stories on Amazon, which have received high critical praise (at the time of writing, that is).

He is inspired by writers such as Stephen King, Clive Barker, JG Ballard and Martin Amis.

His first full-length novel is due to be released soon.