Armand Rosamilia was one of the first authors to sign up for Bad Moon Rising a couple of years ago and, taking into account the number of books he’s written and the podcasts he hosts, I wonder how he had time to even email me!  I’m thrilled to have him back for the third year.  Read below for Armand’s favorite candy (which fans kindly bring to him in copious amounts) and his unlikely Halloween costume.

Sometimes it’s not just the zombies in a post apocalyptic landscape that are the problem.

As Darlene Bobich and the survivors try to rebuild and live another day, a new menace is coming at them from all angles.

The zombie horde is coming but will The Promised Land survive to see it?

About seven years ago I went to a party but had no idea it was a Halloween event. Everyone was dressed like it was the 80’s. Women dressed like Madonna, wearing neon outfits and headbands, guys dressed like Top Gun. I was wearing a SLAYER shirt and someone remarked how cool it was and where I bought it for the party. I told them it was just a shirt I put on tonight. I got a strange look from the guy.

Anything with chocolate. It’s my one vice. I am a huge fan of plain or peanut M&M’s. It’s gotten to the point where fans and other authors will bring a bag for me when I’m at a convention or book signing. I’m not complaining, although at one con I received 14 lbs. of M&M’s and my wife knew I would eat most of it. In the next few days. Which I did.

It sounds cheesy to say, but I really did want to be a writer. At 12 years old I started reading Dean Koontz books and it opened my eyes to reading and writing. It took me until my early 40’s to start writing full-time but it was worth the journey. I am living my dream today.

Phantoms by Dean Koontz. As a teen it spooked me while reading it, the first time it had ever happened and it was a defining moment for me. Before that a story might be great or bad but it was just a story. This book changed the way I looked at books. It might seem tame compared to all that’s come since, but for me it was the one book I wish I’d written for the unsettling feeling I got reading it.

Tosha Shorb from the Dying Days zombie series. What started out as a one-shot minor character has grown into a major one, and she’s appeared in most of the books so far. She’s a tough redhead who takes no crap from anyone. She’s chaotic. Selfish. Deadly. Her twin sister is dead but they still talk. Lots of layers to Tosha I never thought I’d be exploring. The readers either love her or hate her. There’s no in-between with the things she does.

I wish I’d taken the leap of faith years before I did. I wasted my twenties and early thirties in bad relationships, dead-end jobs and dreaming without acting on what I wanted from life. When I was laid off from my job as a retail manager six years ago I decided to give writing a try, all the while looking for another horrible retail management job. I proved to myself I could do this for a living and be happy.

Armand Rosamilia is a New Jersey boy currently living in sunny Florida, where he 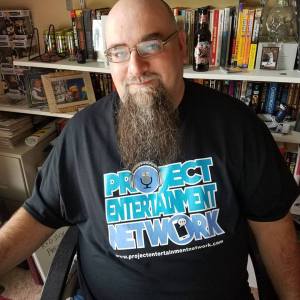 writes when he’s not sleeping. He’s happily married to a woman who helps his career and is supportive, which is all he ever wanted in life…

He’s written over 150 stories that are currently available, including horror, zombies, contemporary fiction, thrillers and more. His goal is to write a good story and not worry about genre labels.

He not only runs two successful podcasts…

But he owns the network they’re on, too! Project Entertainment Network

He also loves to talk in third person… because he’s really that cool.

You can find him at http://armandrosamilia.com for not only his latest releases but interviews and guest posts with other authors he likes!

and e-mail him to talk about zombies, baseball and Metal: