Who doesn’t love zombies at Halloween (or on Sunday nights during The Walking Dead), am I right?  Today’s author brings us zombies and discusses aliens and time travel – welcome C.M. Saunders! 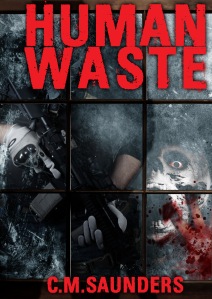 Dan Pallister is a survivalist and prepper. Much to the chagrin of the people around him, he’s been surviving and prepping since childhood. He just didn’t know what for. When he wakes up one morning to find the world overrun with bloodthirsty zombies it all becomes clear, and despite the fall of civilisation, he can’t wait to get started. He just needs to stock up on supplies from the local supermarket first.

But is everything what it seems?

Bonus Content:
Til death do us Part (short story)
No Man’s Land: Horror in the Trenches (exclusive extract)

WARNING: This book contains descriptions of graphic violence and/or sex, and is not suitable for children.

Raw, the French cannibal film, is getting a lot of press. It’s good, and certainly contains some gut-wrenching scenes, but I’m going with Alien: Covenant. It’s the second prequel, if that makes sense, continuing on from where the disappointing Prometheus left off. It fills in a lot of back-story, is a definite return to form, and is a brilliant stand-alone sci-fi horror in its own right. 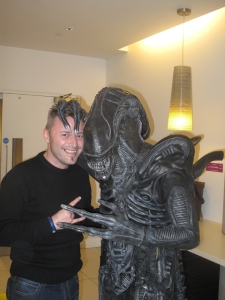 I’ve had several. I’m open to the paranormal, but at the same time I’m naturally very skeptical. One thing I do believe in, though, is alien life. It’s very naïve, and a little arrogant of people to think we are the only intelligent creatures in the universe. A few years ago, I was on holiday in Greece with an old girlfriend. It was late afternoon, and we were walking along the beach. Something told me to look up, so I did, and directly above us, there was an object just hanging there. It was metallic, silver-coloured, and shaped like a shuttlecock. It wasn’t moving, and it made no sound. I remember an eerie hush, and a general sense of unease. We watched this object for a few minutes. I took a few pictures on my camera, then we continued our walk. When we looked up again a few minutes later, the object was gone, and when I had the film from the camera developed, it showed nothing but an empty sky. That was probably the weirdest thing of all, because my girlfriend and I definitely both saw something. I just hope the aliens we meet are more friendly than the ones in the Alien films!

Good question. It’d be easy to say you’d go back and help mankind by stopping the JFK assassination or killing Hitler, but I’d be wary of changing history too much. Anything might happen. So I might just go to Woodstock and get wasted, though the ones who were actually there say it was a terrible experience with all the mud and stuff. An even more selfish option would be to go back to before the digital revolution and invest all my money in Microsoft or Google or something. That way, the world would turn out the same, except I’d be a whole lot richer.

I’m on the third installment of a YA historical adventure series, about a troubled teen who stumbles across an ancient a time-travel device in a rock pool in Wales, figures out how to use it, and goes rampaging through history. I try to write them in such a way that they are both entertaining and educational. My agent is confident about finding a reputable home for them, so fingers crossed. That book will be finished in a month or so, then I can start putting together X3, the third installment in my short fiction anthology, and get it ready for a February 2018 release. Most of the stories in my X books have been published before in various places, and every couple of years I gather ten together (X) and release them.

I always have multiple projects on the go at any one time, and jump from one to another. I might do more work some days than others, but I rarely take days off. I find I’m much more productive that way. If things slow down or grind to a halt on one endeavour, I just switch to another. Of course, it means that some things never get finished, but I find myself working at a steady pace. I’ve developed the same habit in my reading. I never read just one book at a time. No matter how good the book is, I tend to drift in and out of it. So I invariably have five, six or more on the go at any one time. I don’t just read fiction in my genre, I also read a lot of rock music and sports autobiographies, survival stories, history, travel. Pretty much anything that grips me.

At the moment I’m very attached to Dan Pallister, the main protagonist in my new novella, Human Waste. He’s a prepper, or a survivalist. That’s something that has always fascinated me. Not just the mind-set, but the practicalities of it all. Some people go to extraordinary lengths to ensure they are prepared for the end of the world as we know it. In the book, Dan finally gets to put his skills to the test one day when he wakes up to find the world outside his apartment crawling with the undead. It sounds like a straightforward zombie romp, but there is more to it than that. I just can’t say too much not to give the ending away! My work has often been described as containing a sardonic sense of humour, and I think this book lives up to my reputation.

C.M. Saunders is a freelance writer and editor. His journalism has appeared in 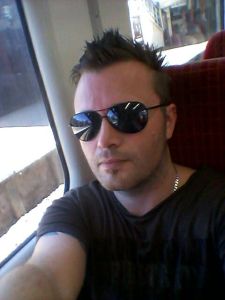 publications such as Loaded, Record Collector, Fortean Times and Urban Ink, while his fiction has appeared in over fifty magazines, ezines and anthologies, including Raw Nerve, Fantastic Horror, Trigger Warning, Liquid Imagination, Gore, DOA 3 and the Literary Hatchet. He is a hybrid author, meaning his books have been both traditionally and independently published, the most recent being X SAMPLE and Apartment 14F: An Oriental Ghost Story (Uncut) which are available now via Deviant Dolls Publications. He is represented by Media Bitch literary agency.