If you’re still searching for a Halloween costume, it would be hard to top this author’s ensemble from last year.  It’s also quite possible he’s a demon magnet.  Intrigued?  Read more about J.P. Jackson below! 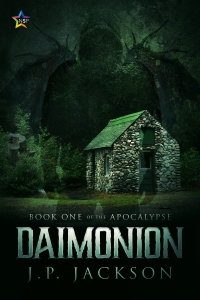 Dati Amon wants to be free from his satyr master and he hates his job—hunting human children who display demon balefire. Every hunt has been successful, except one. A thwarted attempt ended up as a promise to spare the child of a white witch, an indiscretion Dati hopes Master never discovers.

But Master has devilish machinations of his own. He needs human-demon hybrids, the Daimonion, to raise the Dark Lord to the earthly realm. If Master succeeds, he will be immortal and far more powerful.

The child who was spared is now a man, and for the first time in three hundred years, Dati has a reason to escape Master’s chains. To do that, Dati makes some unlikely alliances with an untrained soulless witch, a self-destructive shape shifter, and a deceitful clairvoyant. However, deals with demons rarely go as planned, and the cost is always higher than the original bargain.

This is a hard one. Halloween has always been my favorite holidays, and so I often

dress up. But, I think the costume that has been the most memorable in the last decade was last year’s Papa Legba outfit.

Imagine, on the morning of Halloween, it’s still dark, there’s an ominous fog, and you walk out your house with a billowing cape, flawless makeup, and your ornate soul-catching walking cane accompanying you down the street, to the local rapid transit train station. Upon boarding the train – everyone gives you a wide berth, and then when you arrive at your downtown destination – you scare the crap out of folks as you walk to your high rise office tower, where you work the day away researching which soul to collect next.

Oh, I have many. I find that things are attracted to me.  Animals, spirits, demons, and hey even my husband! But one night, after a party, several of us crashed at a friend’s house. Everyone awoke at the same time from bad dreams.

Folks collected in the living room, where after some discussion, discovered each person had had the same dream – shadow demons, long, thin, gangly, clawed, wraith-like creatures had shown up, invaded the house, breaking through all the protective wards. Everyone felt the beings had inspected each person as they slept.

Except for me – I didn’t wake up, wasn’t part of the conversation. I slept in a separate part of the house away from everyone else. When my friends realized I wasn’t present, they came to the back bedroom to check on me.

Hovering near my bed, surrounding the bed, and crawling out from under the bed, were all the shadowy creatures. Apparently, I was what they were looking for.

Believe it or not, I wanted to be a marine biologist. The thought of spending days on the sun-shining ocean, while diving amongst tropical fish just sounded like the best job ever! Then I took my first chemistry class which was a requirement. FAIL. No marine biology for me.

By the time everyone’s reading this, I should have just finished a new novel about five twenty-something adults who find themselves with magical abilities they can’t control. They are housed, for their own safety and others, at the Centre for Magical Research and Development. A ‘teacher’ is brought in to help them gain control over their new found talents. Unfortunately, the mentor is broken, unwilling, and can’t escape the ghosts of his past class where he fell for one of the students. A student who couldn’t get control.

The biggest problem; the CMRD euthanizes those students who can’t get a grip on their abilities, and so the students refer to the place as Control Magic oR Die – hence the name of the book: Magic or Die.

Anne Rice and Stephen King. I think in my teen years I read just about everything from both of these authors.  My favorite Anne Rice stories are about the Mayfair Witches, and I love all the early Stephen King books from The Shining up to The Stand.

I’d like to think that my writing has elements reminiscent of each of these literary giants.

Recently, however, I’ve come across Patricia Briggs – who writes more Urban Fantasy, but still her Mercy Thompson books were quite enjoyable, filled with fantastic creatures, and just the right amount of blood.

Well, the whole process is still very new to me, so I’m not sure my answer would

stand true if you asked me again in another year or two.  But having said that, I’ve always got more projects and plot bunnies scurrying around than Carol Anne had poltergeists. There just seem to be more ideas than there is time to write them all down.

Of course, writing it down is only step one. Then there’s the self-editing – the beta readers suggestions and edits, the submission to your editor (and they always have edits – like, several rounds of them). So yeah, once one project is done, it takes a while before it’s polished and ready to be consumed by the public.  I tend to focus in on one project at a time because I really want to produce the best story I possibly can – and that, for me, means I have to devote all my attention towards that goal.

My characters from those stories live right alongside of me – and I’m pretty sure my husband has caught me talking to them.

J.P. Jackson works as an IT analyst in health care during the day, where if cornered

he’d confess to casting spells to ensure clinicians actually use the electronic medical charting system he configures and implements.
At night, however, the writing happens, where demons, witches, and shape shifters congregate around the kitchen table and general chaos ensues. The insurance company refuses to accept any more claims of ‘acts of the un-god’, and his husband of almost 20 years has very firmly put his foot down on any further wraith summonings in the basement. And apparently, imps aren’t house-trainable. Occasionally the odd ghost or member of the Fae community stops in for a glass of wine and stories are exchanged. Although the husband doesn’t know it, the two Chihuahuas are in cahoots with the spell casting.
J.P.’s other hobbies include hybridizing African Violets (thanks to grandma), extensive traveling and believe it or not, knitting.