Happy Friday 13th!  Maybe you’re superstitious about the date, but I’m not.  My youngest son was born on a Friday 13th, so I consider them very lucky.  And we’re fortunate today to have Staci Troilo here to share a chilling paranormal experience, along with her paranormal novel, Love Set in Stone.  Welcome, Staci! 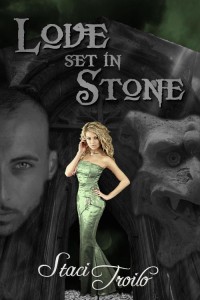 Gargoyles have always fascinated me. Actually, I didn’t realize it wasn’t necessarily gargoyles, but grotesques, that captured my fancy. Those gothic sculptures atop cathedrals with demonic faces and frightening forms are so compelling to me.

You can imagine my surprise when I discovered they weren’t intended to be frightening at all.

Gargoyles are misunderstood. I think they, as well as other myths and legends, are often portrayed based on assumptions and biases rather than how they were actually created. We see it in the Bible (Nimrod isn’t a moron, but rather a well-respected, mighty man). We see it in cryptozoology (Mothman—was he the cause of the bridge collapse, or was he there to warn people of impending danger?). And we see it in legend (Gargoyles aren’t demons sent to terrorize, but rather are protectors of the people).

Before I wrote Love Set in Stone, I had a lot of ideas swirling in my mind. It wasn’t until I read “God Bless the Gargoyles” by Dav Pilkey that the concepts finally coalesced into the grotesque, Damien; his overseeing angel, Anael (or Al); and the fallen who’s sent to keep balance, Penemuel (or Pino).

Playing with the legend was one of the most entertaining parts of writing Love Set in Stone. I enjoyed taking the myths and making them mine. Here is an excerpt where you can see the interaction among the three of characters of legend. (Explicit language follows.)

Damien transformed again and flew back to his roof. He didn’t know where else to go.

Once he got there, he regretted his decision.

Anael and Pino stood there. Apparently waiting for him. 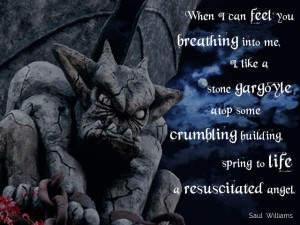 “I have a few hours before sunrise. I’d rather spend them alone, if you don’t mind.”

“You let this… abomination dictate his wishes to you?” Pino asked Anael. “No wonder I’ve been sent to set things right.”

Rage roiled through Damien. He might not be able to take an angel—fallen or otherwise—but he wouldn’t stand to be insulted by one. He bared his claws and rounded on Pino, but Anael stepped between them and pushed him back.

“Damien, please turn back into your human form. My brother might find you easier to talk to that way.”

Damien didn’t care what Pino found easy. It hurt like hell to morph. And he didn’t see why he needed to endure the pain just to make things easier for the fallen.

Damien ground his teeth and assumed human form. Tried not to let his expression register the pain.

Damn mind-readers. “Stay the fuck out of my head.”

“Nothing interesting in there, anyway.”

Again Damien went to charge at him, and again Anael intervened.

“Damien, this is my brother, Penemuel. He’s been dispatched to counteract the rules I’ve broken.”

“You want to tell me how seducing Rina settles the score?”

Penemuel shrugged, buffed his nails on what was undoubtedly a designer shirt. “You slept with her.”

The fallen raised a brow. “Seriously? That argument, coming from you?”

Damien huffed, gritted his teeth. Struggled for a sense of calm he could only imagine. Finally, he spoke in a soft, controlled voice. “She’s my destiny, not yours.”

The fallen pierced him with a dark stare. “But you weren’t supposed to deceive her, were you?”

“What was I supposed to do? Show her that gargoyles are real?”

“Stay away from her.” His tone rose, sharpened.

Anael stepped between them. “Okay. Let’s everybody cool down. I think it’s safe to say we’ve all made a mistake or two. What matters now is how we proceed from here.”

“I’ve made no mistakes. I’m doing what I was sent here to do. And I’ll proceed however I damn well see fit.” And Penemuel vanished.

So, actually, I got to play with more than one myth. In Love Set in Stone, I explored the definitions of what grotesques, angels, and fallen angels are. It was the exploration I enjoyed the most when I wrote the novel, and I think it’s something I’d like to explore in further detail down the road. (I already have a series in mind that brings back Al and Pino, something several of my readers have requested.)

I hope you enjoyed this brief look at the gothic creature and the excerpt of Love Set in Stone. Thanks, Teri, for having me here today. Oh, before I forget, the answers to your BAD MOON RISING questions: