If you’re not familiar with this author’s books, you’re in for a treat.  I’ve read several, and have Mass Hysteria waiting for me – just trying to work my way to it!  Welcome, Michael Patrick Hicks! 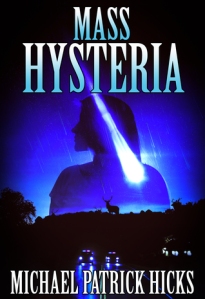 It came from space…

Something virulent. Something evil. Something new. And it is infecting the town of Falls Breath.

Carried to Earth in a freak meteor shower, an alien virus has infected the animals. Pets and wildlife have turned rabid, attacking without warning. Dogs and cats terrorize their owners, while deer and wolves from the neighboring woods hunt in packs, stalking and killing their human prey without mercy.

As the town comes under siege, Lauren searches for her boyfriend, while her policeman father fights to restore some semblance of order against a threat unlike anything he has seen before. The Natural Order has been upended completely, and nowhere is safe.

…and it is spreading.

Soon, the city will find itself in the grips of mass hysteria.

To survive, humanity will have to fight tooth and nail.

“Mass Hysteria is a hell of a brutal, end of the world free for all. A terrifying vision of a future gone mad with bloodlust, Mass Hysteria will haunt your nightmares.” – Hunter Shea, author of Just Add Water and We Are Always Watching

“Mass Hysteria was a brutal horror novel, which reminded me of the horror being written in the late 70’s and, (all of the), 80’s. Books like James Herbert’s The Ratsor Guy N. Smith’s The Night of the Crabs. There are a lot of similarities to those classics here-the fast paced action going from scene to scene-with many gory deaths and other sick events. In fact, I think Mass Hysteria beats out those books in its sheer horrific brutality.” – Char’s Horror Corner

“I’m telling you now, this book isn’t for readers with weak stomachs. It is brutal in all the right ways.” – Cedar Hollow Horror Reviews

“If you are an aficionado of author Richard Laymon, you undoubtedly will like this book. This is horror at its bloodiest, guttiest and most shocking.” – Cheryl Stout, Amazon Top 500 Reviewer and Amazon Vine Voice

Sadly, I haven’t seen any movies this year! As a full-time office drone, a husband, and a father of a two-year-old, in addition to being an author and publisher, free time to enjoy a movie is pretty scarce. I’ve found that I’d rather be reading or sleeping during those rare periods of quiet. That said, I must and will see the latest adaption of Stephen King’s IT once it hits Blu-ray. I’ll make time for that one, for sure! It’s certainly the best movie trailer I’ve seen this year.

A number of years ago, a short while after moving into our home, I was alone in the kitchen and the house was empty. I was opening the refrigerator door and felt somebody tap my right shoulder, but when I turned nobody was there. Even still, I had the distinct impression I was being watched and I could feel eyes on the back of my neck, the hair there standing on end. I’m not a believer in the paranormal, and while it was probably just an odd nerve twitch that creeped me out, I definitely got that whole what if vibe and couldn’t help but wonder if I was really as alone as I had thought…

Ned Flanders from The Simpsons.

I’m prepping the release of a novella called Broken Shells, which I’ll be uploading exclusively to Patreon for my supporters there. Odds are, by the time this post goes live, this story will already have been made available to patrons. That one will be off to retail later this year or early next year. Writing-wise, I’m currently one-third of the way into the final book in a trilogy of historical horror novellas that I’m hoping to release sometime in 2018. They’re set in post-Revolution America and involve a freed man’s experience with a death cult and monsters. As I get closer to scheduling these releases, I’ll be posting information on my website (http://www.michaelpatrickhicks.com) and if readers want to snag an early, pre-release copy of Broken Shells, they can do so for only $1 at my Patreon page (https://www.patreon.com/michaelpatrickhicks).

I mentioned Stephen King’s IT up above, and both the author and that book in particular have had an enormous influence on my work. That was the first King novel I read, probably in the mid-1990s, I’d say, and I was at a particular age where the experiences of the young Loser’s Club resonated so strongly with me. I was on summer vacation from high school, after having spent so much of the year being bullied by some jackass jock, and I saw so much of myself in each of those Derry kids as they confronted their own bully and were pulled into adulthood by the savage world around them. I wasn’t much of a reader prior to IT, but I ate that thing up in just a handful of days and then went on to devour very nearly everything else King had published up to that point. I realized with that novel, more than any of the boring old classics shoved down my throat in school, just how powerful a story could be and how engrossing a novel could be, the way it could unfold in your mind like a movie and how the characters could speak directly to you. That book made me a constant reader, but it also made me want to write and to study the craft of writing. I honestly don’t think I’d be the man or the artist I am today without that book first and foremost.

It depends on the projects, really. Some are more emotionally draining or work intensive than others, and so require a bit of a breather before I can move on to another story. Other times, I can jump right in or have to force myself to finish the current project before abandoning it for whatever new wild idea has struck my fancy.

Michael Patrick Hicks is the author of the science fiction novels Convergence, 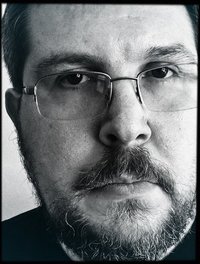 an Amazon Breakthrough Novel Award 2013 Quarter-Finalist, and its sequel, Emergence, as well as several horror titles, including his most recent novel, Mass Hysteria.

His work has appeared in several anthologies, and he has written for the websites Graphic Novel Reporter and Audiobook Reviewer, in addition to work as a freelance journalist.

In between compulsively buying books and adding titles that he does not have time for to his Netflix queue, he is hard at work on his next story.