It’s finally Friday!  Today’s guest is K. Matt with her collection of graphic novels blending urban fantasy, sci-fi, and horror, with a bit of humor and plenty of action – sounds perfect to me.  Aren’t these covers striking and vivid?

Dr. Spencer Abbot has been searching for the ideal anniversary gift for his wife.

When he and his friend Travis meet a woman that claims she can help, they accept.  The pair are led to Visions Studios. But instead of the boudoirs photos they’d intended to get, they stumble upon something far more sinister: snuff films.  Before long, it’s up to Travis to resolve their situation, no matter what tries tog et in his way.

This first installment of the Hell Bent series blends urban fantasy, sci-fi, horror, a bit of humor, and plenty of action.

Abbots/Malones had dealt with sadistic murderess Jesse Lynn Belle. Over this time, Travis and Spencer have been undergoing therapy, trying to cope with the trauma. But signs of Jesse’s presence begin cropping up. And it’s beginning to take a toll on Travis. It soon comes down to him, his aunt, and his friends to track her down, before it costs them the rest of their family. This second installment in a three-part story arc brings more action, new characters, and more of the city of Hell Bent.

four months, and things couldn’t be better. The nightmares have been happening with less and less frequency, and Spencer is now a father. But then an evil they hoped never to encounter again turns up, and Travis soon finds himself taken from all he knows and loves. And it’s Jesse’s intent to utterly break the young half-monkey. What if she succeeds? And if she does, will his family and friends be able to fix him?

Sick of being the universe’s punching bag, Dr. Spencer Abbot begins to look

into self-defense training. His search leads him to Slade McManus, a powerful mage who is more than willing to teach Spencer the ways of magic.  But there is something very off about this mage, and before he knows it, Spencer and Travis find themselves in trouble yet again.  Can they keep their lives from being ruined by McManus?

Dr. Spencer Abbot: there was once a time that he was (mostly) at peace, living

with his family. But for the past couple of months, he has had to hide from the law. As if that weren’t enough, he has started to experience nightmares and see ghosts of those he feels he has failed to save.  He and his support system know who is behind the sightings, but not where Slade McManus is.  Will things ever be okay again for the doctor? Or will Slade successfully drive him beyond the brink?

Since before I was published, I had been told to think about word choice when alternating 1st person POVs. If the word choices are too similar, the characters sound too similar. I’ve taken that piece of advice to heart (I like to think).

One thing I’ve heard a few times is that my characters are probably my strongest point.

I don’t think I’d get along with Slade at all. He hates modern technology, has rather…antiquated views on women, and he’s just overall an arrogant jerk.

Aw, man…it’s hard to play favorites when it comes to cookies. I don’t think I’ve met a cookie I didn’t like (well…that one vegan one, but even then it wasn’t so much “dislike” as “I’m really not used to this…”). But I’ll probably go with Oreos. I’m not sure exactly why, but they’re the first that popped into my head.

“I’m here to finish what my big bronze cousin started,” he says to me, an evil gleam in his penguin-y eyes. He’s carrying a large bronze flipper, looking to smack me over the back of the head. “Not again…” I groan as I grab my bullwhip to try and defend myself.

Another hard one. I’m something of an animation freak, so there’d be so many choices… One that I’ve cosplayed as before, though, is Amethyst from Steven Universe. So, I’d probably go with her. I’ve already got a close-enough body type, and it’d be nice to not require sleep. Plus, I do like the color purple. Sure, there’d be drawbacks and whatnot, but …yep, I’d likely go with her. Also, I’d be less likely to accidentally hit myself with the bullwhip mentioned in my previous answer. It might still happen. But it’d be less likely.

K. Matt is a graduate of Philadelphia, PA’s University of the Arts. Her interests in 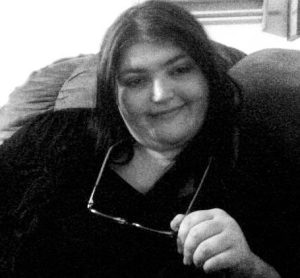 sci-fi, fantasy, horror, comics, and anime have inspired her to both write and illustrate her own work.

The books in the Hell Bent series are a combination of prose and graphic novels, and tend to be a mixture of (somewhat soft) sci-fi, urban fantasy, and horror. It is something of a pet project for her, a pet that she feeds with time, and that feeds on her sleep.