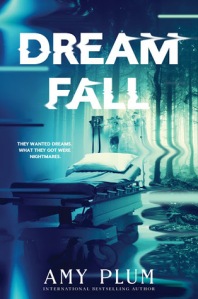 an experimental new procedure. She thought things couldn’t get any worse…but she was terribly wrong.

Soon after the experiment begins, there’s a malfunction with the lab equipment, and Cata and six other teen patients are plunged into a shared dreamworld with no memory of how they got there. Even worse, they come to the chilling realization that they are trapped in a place where their worst nightmares have come to life. Hunted by creatures from their darkest imaginations and tormented by secrets they’d rather keep buried, Cata and the others will be forced to band together to face their biggest fears. And if they can’t find a way to defeat their dreams, they will never wake up. – Goodreads.com

I first heard about this book on another blog – can’t remember which one, but when I saw it on Edelweiss, I got my request in ASAP and was thrilled when I received approval to read it.

I’ve never read anything quite like Dreamfall – which is probably why the book description piqued my interest.  Almost immediately, the reader is plunged into a crisis when there’s a malfunction with the lab equipment, and the pace never quite lets up from there.  The teens have some down time between dreams when they try to figure out what’s happening to them, but they’re soon thrust into another life-threatening dreamscape.  And the dreams – these aren’t the typical high school dreams of forgetting to study for a test, can’t get the locker open, or showing up to school naked.  Trust me, they aren’t for the faint of heart.  As someone who’s a tad claustrophobic, I had difficulty breathing in one scene while my heart was pounding.

The chapters alternate between two of the teens trapped in the shared dreamworld and a medical student observing the experiment, which gave a full picture of what was happening in the dreams versus the effect they had on the teens’ physical bodies lying in the lab.  The chapter titles give the name of the character POV, but in the beginning, I had trouble distinguishing which teen perspective I was reading because their voices are so similar.  I had to flip back several times to see who was talking, but from the middle to the end, it wasn’t as quite as difficult – possibly because I knew the characters better by then.  There are also a couple of unexpected twists near the end that are game-changing.

Dreamfall is a dark, tension-filled YA horror novel that would appeal to fans of Kendare Blake and Rin Chupeco.  If you like your horror more suspenseful than gory, this is for you.  I’ll definitely be reading the sequel!

Dreamfall is scheduled for publication May 2nd, 2017 and is the first book in a duology.  Thanks to Edelweiss for the review copy!