It’s been happening since Min was eight. Every two years, on her birthday, a strange 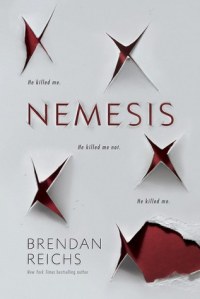 man finds her and murders her in cold blood. But hours later, she wakes up in a clearing just outside her tiny Idaho hometown—alone, unhurt, and with all evidence of the horrifying crime erased.

Across the valley, Noah just wants to be like everyone else. But he’s not. Nightmares of murder and death plague him, though he does his best to hide the signs. But when the world around him begins to spiral toward panic and destruction, Noah discovers that people have been lying to him his whole life. Everything changes in an eye blink.

For the planet has a bigger problem. The Anvil, an enormous asteroid threatening all life on Earth, leaves little room for two troubled teens. Yet on her sixteenth birthday, as she cowers in her bedroom, hoping not to die for the fifth time, Min has had enough. She vows to discover what is happening in Fire Lake and uncovers a lifetime of lies: a vast conspiracy involving the sixty-four students of her sophomore class, one that may be even more sinister than the murders. – Goodreads.com

Wow.  Describing this book is difficult, but I’ll try.  Take Red Dawn, The Matrix, Lost, and The Hunger Games, shake them up in a bag, and what comes out is the plot of Nemesis.  This book twisted, turned, and steered me in so many different directions I was never sure exactly what was going on – and it was wonderful.  After reading so many books, not many surprise me anymore.

The setting is present day Idaho – but after a few pages, it’s evident something’s not quite right.  And then the pace never lets up.  This book is well-written, with natural dialogue and contains both captivating and frustrating characters.  Although it’s not a problem for me, there are shifting POVs, so be forewarned if that’s a distraction.

I plowed through this book in a couple of days, but don’t let the 400+ pages scare you – it’s actually a quick read.  And I can’t wait for the next book!  Nemesis is scheduled for publication March 21st, 2017.

Thanks to Penguin First To Read for the digital ARC.