When Tea accidentally resurrects her brother from the dead, she learns she is different 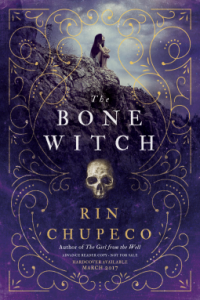 from the other witches in her family. Her gift for necromancy means that she’s a bone witch, a title that makes her feared and ostracized by her community. But Tea finds solace and guidance with an older, wiser bone witch, who takes Tea and her brother to another land for training.

In her new home, Tea puts all her energy into becoming an asha — one who can wield elemental magic. But dark forces are approaching quickly, and in the face of danger, Tea will have to overcome her obstacles…and make a powerful choice.

Memoirs of a Geisha meets The Name of the Wind in this brilliant new fantasy series by Rin Chupeco! – Goodreads.com

I’m such a fan of The Girl From the Well series by this author – such vivid, chilling imagery and a couple of the best YA horror novels I’ve read.  When I saw this new fantasy series, I jumped at the chance to request it from NetGalley.

The author has created a colorful and captivating world with intricately designed huas worn by the ashas and varying shades of heartsglass that can reveal a person’s thoughts and health.  That being said, the narrative seems bogged down at times with the detailed descriptions of the huas and I skimmed several sections.

Tea, Fox, and the supporting characters are all well-drawn and engaging and I liked the alternating chapters of future Tea’s warnings of what’s to come.

This novel had the feel of laying the groundwork for the meat of the story and the pacing was somewhat slow for my taste – honestly, not a lot happens, but it allows the reader a good grasp of the world and characters and hints at substantial wars and conflicts to come.  I have high hopes for book 2 in this series.

The Bone Witch is scheduled for publication March 7th, 2017.

9 thoughts on “The Bone Witch by Rin Chupeco #bookreview #TuesdayBookBlog”