Young Jude Brighton has been missing for three days, and while the search for him 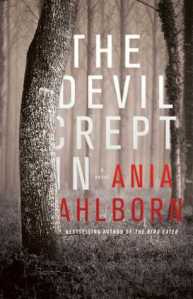 is in full swing in the small town of Deer Valley, Oregon, the locals are starting to lose hope. They’re well aware that the first forty-eight hours are critical and after that, the odds usually point to a worst-case scenario. And despite Stevie Clark’s youth, he knows that, too; he’s seen the cop shows. He knows what each ticking moment may mean for Jude, his cousin and best friend.

That, and there was that boy, Max Larsen…the one from years ago, found dead after also disappearing under mysterious circumstances. And then there were the animals: pets gone missing out of yards. For years, the residents of Deer Valley have murmured about these unsolved crimes…and that a killer may still be lurking around their quiet town. Now, fear is reborn—and for Stevie, who is determined to find out what really happened to Jude, the awful truth may be too horrifying to imagine. – Goodreads.com

I’ve read Brother and Within These Walls by Ania Ahlborn, so yes, I’m definitely a fan of her work.  The Devil Crept In didn’t engage me quite as much, but it was still a thrilling read.

This book is creepy, disturbing, dark, chilling – all good things when it comes to horror.  Stevie has a history of hallucinations, so when he realizes something isn’t quite right with Jude, the reader has to question if Stevie is a reliable or unreliable narrator.  Whatever the case, I could empathize with his frustration when the adults assured him he was only imagining things after asking for their help.  With his own difficult life circumstances, Stevie’s love for his cousin and determination to save him are admirable and the driving force behind this story, in my opinion.

As for the evil presence lurking in the forest, I appreciated the author offering a full backstory of this sinister creation – it added more depth to the novel and made it feel more complete.

The pacing was somewhat slow for my taste in the beginning and a good amount of time is spent in Stevie’s head and describing his living conditions, but the story jumps back on track soon after.

Fans of twisty dark horror won’t want to miss this one.  This book is scheduled for publication February 7th, 2017.

Thanks to NetGalley for the digital ARC.