In Paris, 1888, the city prepares for the Exposition Universelle and the new Eiffel Tower swiftly rises on the bank of 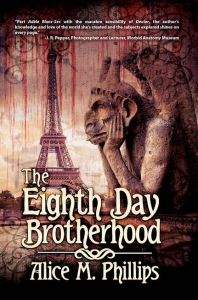 the Seine. One August morning, the sunrise reveals the embellished corpse of a young man suspended between the columns of the PanthEon, resembling a grotesque Icarus and marking the first in a macabre series of murders linked to Paris monuments. In the Latin Quarter, occult scholar REmy Sauvage is informed of his lover’s gruesome death and embarks upon his own investigation to avenge him by apprehending the cult known as the Eighth Day Brotherhood. At a nearby sanitarium, aspiring artist Claude Fournel becomes enamored with a mesmerist’s beautiful patient, Irish immigrant Margaret Finnegan. Resolved to steal her away from the asylum and obtain her for his muse, Claude only finds them both entwined in the Brotherhood’s apocalyptic plot combining magic, mythology, and murder. – Goodreads.com

With a cover like this, how could you not want to read it?  The gargoyle along would have me ripping the book off the shelves just to see what it was about.

The Eighth Day Brotherhood is a beautifully written, dark tale, rich with atmospheric details of Paris in 1888, a time period I’ve always enjoyed reading about.  This suspense-filled story may not be for the faint of heart, as the grisly murders are described in vivid detail, befitting for this type of novel.  It’s obvious the author did her research in regards to the mythological references and Paris itself, as the descriptions made me feel as if I were walking the streets with the characters.

This is a captivating historical thriller filled with references to history, art, and religion that pulled me in from the first page.  I’d love to see more of these characters.

I received a digital copy of this novel from the author.

One thought on “The Eighth Day Brotherhood by Alice M. Phillips #bookreview”