Teaser Tuesday is a weekly bookish meme, hosted on Books and a Beat.

Anyone can play along! Just do the following:
• Grab your current read
• Open to a random page
• Share two (2) “teaser” sentences from somewhere on that page
• BE CAREFUL NOT TO INCLUDE SPOILERS! (make sure that what you share doesn’t give too much away! You don’t want to ruin the book for others!)
• Share the title & author, too, so that other TT participants can add the book to their TBR Lists if they like your teasers! 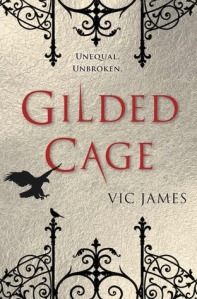 Location 552:  Directly in front of the Hadleys a gate appeared.  The ornamental ironwork was a gilded riot of cleverly wrought birds and flowers.  It reared up to twice the height of the wall and gleamed with a strange, intense light.  Through its elegant, open tracery, two male figures on horseback were now visible.

Our world belongs to the Equals — aristocrats with magical gifts — and all commoners must serve them for ten years. But behind the gates of England’s grandest estate lies a power that could break the world.

A girl thirsts for love and knowledge.

Abi is a servant to England’s most powerful family, but her spirit is free. So when she falls for one of the noble-born sons, Abi faces a terrible choice. Uncovering the family’s secrets might win her liberty, but will her heart pay the price?

A boy dreams of revolution.

Abi’s brother, Luke, is enslaved in a brutal factory town. Far from his family and cruelly oppressed, he makes friends whose ideals could cost him everything. Now Luke has discovered there may be a power even greater than magic: revolution.

And an aristocrat will remake the world with his dark gifts.

He is a shadow in the glittering world of the Equals, with mysterious powers no one else understands. But will he liberate—or destroy?