Welcome to Day 31 – and Happy Halloween!  Today we welcome Deby Fredericks and her book, The Grimhold Wolf.  Halloween and werewolves go hand in paw – is it a full moon tonight?

Madeline — cursed by her former lover to live as a wild beast, yet driven to rescue their son from a legacy of evil.

Thomas — so obsessed with werewolves that he was ordered to retire, now the only hope for a desperate village.

Charlie — forced to choose between his father’s power and his mother’s love. These three must battle through a maze of lies, where demons may be the only true victors.

What’s the first story you ever wrote?

Way back in high school, I made my first efforts at fantasy writing. I wrote most of a novel with mermaids, but then discovered I had no ending. I also wrote something that had a lady knight and a benevolent blue dragon. Nowadays, fantasy is full of lady knights and benevolent dragons, but in the mid-Seventies my high-school self felt like I was stretching the boundaries of what a girl could do.

Mrs. Dunlap, my English teacher, had no idea what I was trying to do, but she encouraged me anyway. Teachers are great that way.

Which fictional character would you most like to meet and have a drink with?

Probably Gandalf from Lord of the Rings. I would pick his brain about how magic works and what it means to be a wizard in Middle Earth.

In the spirit of Halloween, what scares you?

There’s one really cheesy horror movie I saw as a kid, called The Blob. This black tar stuff could seep under doorways and swallow people alive. *shudder* I’m also not too fond of zombies.

Favorite hero and villain in a book/movie?

If they have to be from the same show, then Parn and Ashram from Record of Lodoss War, a great D&D-flavored anime from the 1990s.

What do you consider the hardest part of writing?

Just trying to keep up with it, despite all the other things going on in my life. I write mostly by the seat of my pants, which makes keeping my butt in the chair all the more important. It’s all too easy to get distracted by my kids, who are young adults but seem to believe I should wait on them like toddlers.

My 2012 novel, The Seven Exalted Orders, was really popular, so I’m finishing up a sequel called The Eighth Order. I hope to have it done by the end of 2016. 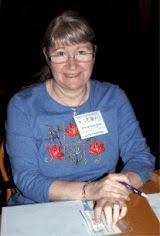 Deby Fredericks has been a writer all her life, but thought of it as just a fun hobby until the late 1990s. Her first sale, a children’s poem, was in 2000. Since then she’s published five fantasy novels through two small presses, plus numerous children’s poems and short stories. Her most recent book is an anthology called Wee Folk and Wise, through Sky Warrior Book Publishing.