In a land where three suns almost never set, a fledgling killer joins a school of assassins, seeking vengeance against 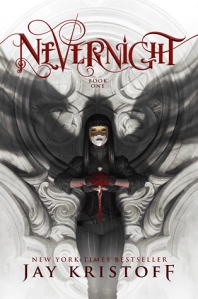 the powers who destroyed her family.

Daughter of an executed traitor, Mia Corvere is barely able to escape her father’s failed rebellion with her life. Alone and friendless, she hides in a city built from the bones of a dead god, hunted by the Senate and her father’s former comrades. But her gift for speaking with the shadows leads her to the door of a retired killer, and a future she never imagined.

Now, Mia is apprenticed to the deadliest flock of assassins in the entire Republic—the Red Church. If she bests her fellow students in contests of steel, poison and the subtle arts, she’ll be inducted among the Blades of the Lady of Blessed Murder, and one step closer to the vengeance she desires. But a killer is loose within the Church’s halls, the bloody secrets of Mia’s past return to haunt her, and a plot to bring down the entire congregation is unfolding in the shadows she so loves.

Will she even survive to initiation, let alone have her revenge? – Goodreads.com

The first line of this book description had me hooked at school of assassins and parts of it hinted at shades of Hunger Games and Nikita.  But I struggled with this novel and it seemed as if it took double my usual amount of time to finish.  Part of that is because it’s a long book, at over 400 pages, but it’s also a very heavy and dark read with a large amount of description that bogged me down and took me out of the story (and that doesn’t include the copious amount of footnotes I skipped).  I nearly quit several times, but the reviews I’d read were positive and the pacing picked up at times, only to dip again soon after – but I stuck it out.

Although the primary characters are young adults and Goodreads classifies this as YA, I wouldn’t recommend it for the younger YA crowd due to language and sexual content.  This book wasn’t really for for me, but based on many other reviews, I think dark fantasy fans would find it a compelling read.  This book is scheduled for publication August 9th, 2016.

Thanks to NetGalley and the publisher for the ARC in exchange for an honest review.