Something is out there, something terrifying that must not be seen. One glimpse of it, and a person is driven to 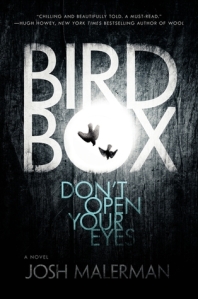 deadly violence. No one knows what it is or where it came from.

Five years after it began, a handful of scattered survivors remains, including Malorie and her two young children. Living in an abandoned house near the river, she has dreamed of fleeing to a place where they might be safe. Now that the boy and girl are four, it’s time to go, but the journey ahead will be terrifying: twenty miles downriver in a rowboat–blindfolded–with nothing to rely on but her wits and the children’s trained ears. One wrong choice and they will die. Something is following them all the while, but is it man, animal, or monster?

Interweaving past and present, Bird Box is a snapshot of a world unraveled that will have you racing to the final page. – Goodreads.com

I can honestly say I’ve never read a book quite like this one – part horror, part psychological suspense, part post-apocalyptic.  Amazing, compelling, and original – a perfect example of how a person’s mind fills in the blanks of what is unseen – and creates a nightmare.

Malorie’s story alternates by chapters between the present and flashbacks to the past, which heightened the tension more than if told in a linear fashion.  Her present, tragic situation is revealed in the first chapter of the book, then in subsequent chapters how the world began to collapse and where her journey began.  It’s not a lengthy book, and I could easily have finished it in one sitting because I needed to know how she’d gotten from point A to point B.

Don’t expect this book to provide a tidy ending because much is left to the reader’s imagination – but if that’s something you shy away from, you’ll be missing out on a unique story and a haunting, suspenseful read.   Highly recommended for horror, thriller, and suspense fans.